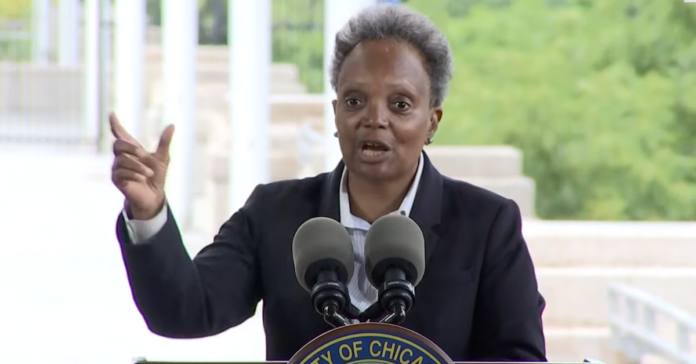 Chicago Mayor Lori Lightfoot has a new nickname that should shame her into a resignation. Lightfoot has been trying to squeeze Chicago residents by lowering the threshold to one of the biggest scams in government, speed camera tickets, from 10 mph to 6 mph.

The residents and leaders were furious and tried to block her blatant money grab. She said as she won the battle:

“No one likes speed cameras. I get it. But this is life or death that we’re talking about here, and we’ve got to step up as a city and address this. It is unconscionable that any City Council member would consider voting to allow for increased speeds near spaces utilized by our children.

“Today, by a 16 to 15 vote, the City Council Committee on Finance voted to sanction higher speeds around schools and parks, when it seems that every day there is another traffic fatality because of speeding and reckless drivers.

“It is simply unconscionable that, after losing 173 Chicagoans to speed-related traffic fatalities in 2021, some Aldermen are acting with so little regard for public safety. By state law, the revenues generated by these fines help pay for public safety, infrastructure, after-school programming in parks and schools, Safe Passage workers, and many more vital programs.

“The Aldermen voting to allow increased speeds around schools and parks are:

“What happened today is simply not responsible governance.

“I will not let City Council jeopardize public safety.”

Would you be surprised that she just got busted for not paying her team’s speed and red light camera tickets? It should not if you are paying attention to the failed Mayor.

And even more shocking, before the media got wind of her duplicity the city routinely dismissed her tickets but you would not be so lucky.

You may be driving along and inadvertently go 6 miles over the limit and get hit with a few hundred dollar fine. But if Lori does it she gets it dismissed or just refuses to pay.

Two of the police-driven SUVs that currently shuttle Lightfoot around town have racked up three speed camera tickets and two warnings in the past 14 months. The city’s finance office confirmed that none of the fines had been paid as of July 22.

One of the mayor’s current SUVs also has a red light ticket. It’s also unpaid.

There are also outstanding speed and red light tickets on two SUVs that used to be assigned to Lightfoot’s security team, according to city records.

Records show one of those SUVs is now eligible to be booted and impounded due to a lack of payment.

Her old cars received many more tickets, but the city had a practice of dismissing Lightfoot’s tickets—until the Chicago Tribune reported on the practice in November 2020.

Some were issued in school zones with children present, according to records. A seizure order is out for one of her old SUVs due to non-payment.https://t.co/sbS8rAHIbN