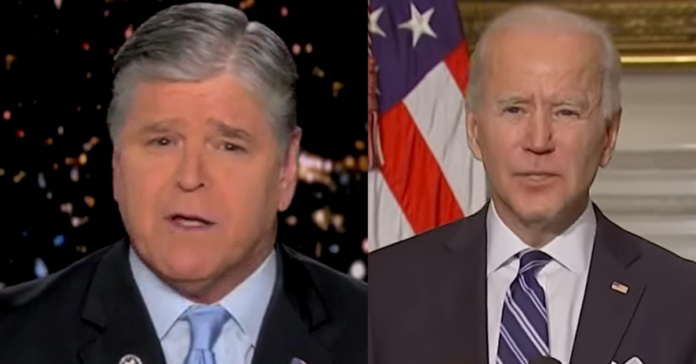 Sean Hannity called out President Joe Biden and ‘whoever is running the White House while Biden is doing his napping’ for doing a terrible job managing the affairs of state. Hannity wants to know what Biden does all day.

He said: “We begin in the Washington swamp. Joe Biden continues to recover from COVID 19, thankfully. We don’t want anybody sick on this program. We wish him well. So far, his schedule is pretty much remained kind of normal for him, which is to say he does little to nothing.

“No president in modern American history has worked less than your president, Joe. He rarely appears in public. He almost never conducts sit-down interviews or press conferences.

“Frequently, the daily briefing is the only thing on his schedule.

“And then, to make matters worse, whoever is running the White House while Biden is doing his napping is doing a pretty terrible job.

“Now, by every metric that we possibly have, Americans are far worse off under Joe Biden than they once were under President Trump.

“Most Democrats in the media mob, they’re now jumping ship.

“They’re all desperately looking for alternatives. Which brings us to our big topic tonight.

“Look at the polls. They speak for themselves.

“New York Times Siena poll, 64% of Democrats, they want somebody else on the ticket in 2020 for his approval rating, according to Quinnipiac, is 31% in an opinion piece over the weekend, The Washington Post.

“Following in the footsteps of The New York Times. Begging Biden to step down after one term, quote, “quit, Joe, quit.”

“How about drill, Joe, drill?

“Anyway, Biden could save the midterms with a one-term pledge.

“The left-wing Atlantic they’re publishing this article listing all the reasons Biden should not run for a second term chief among them, he’s too old for the next election.

“Late-night comedians have pretty much given Joe Biden a pass even when he was on.

“Jimmy Kimmel is like stammering and stuttering and doesn’t know what to say next.

“But now they’re starting to make fun of Joe.

“That is a sign to pay attention to,” he said.

Ron DeSantis Warns Joe Biden Over Chinese Investors Buying US Properties: “I don’t think they should be able to do it. I think the problem is these companies have ties to the CCP, I think it’s a huge problem”