Ron DeSantis Warns Joe Biden Over Chinese Investors Buying US Properties: “I don’t think they should be able to do it. I think the problem is these companies have ties to the CCP, I think it’s a huge problem” 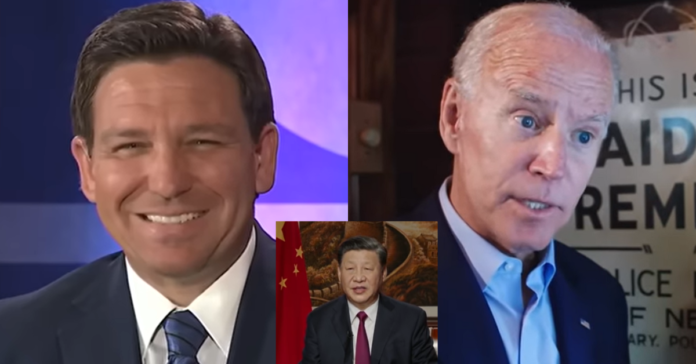 Florida Governor Ron DeSantis is not a wealthy man and that may be why he is one of the few politicians in America who consistently calls out China. Most politicians, like Biden and his family, have been corrupted by millions from Chinese corporations most of whom are tied to the CCP.

Desantis is now sounding the alarm about companies linked to the Chinese Communist Party (CCP) buying U.S. properties. He said:

“I don’t think they should be able to do it. I think the problem is these companies have ties to the CCP, and it’s not always apparent on the face of whatever a company is doing—but I think it’s a huge problem.

“I’ve signed legislation to crack down on undue influence from rogue states, including the CCP.

“So for example, we ban Confucius Institutes in the state of Florida—they try to go in higher education, and they try to spread the propaganda.

“The strategic investments we are making today will help bring microchip and semiconductor manufacturing back to our state at a time when the supply chains are more fragile than ever.

“Certainly, we cannot allow this important industry to become captive by the Chinese Communist Party.

“We’re also probably going to do legislation next legislative session about our pension investments, with things that may be linked to the CCP.

“We don’t necessarily have a lot of it, but we want to make sure that we’re cutting ties so that we’re not funding our No. 1 adversary.”

Foreign buyers from China spent $6.1 billion, more than from any other foreign country, on U.S. homes from April 2021 to March,  according to a recent report from the National Association of Realtors (pdf).

…An increasing amount of U.S. farmland is controlled by Chinese buyers.

In 2017, the Chinese government offered to build a $100 million Chinese garden at the National Arboretum in Washington D.C. under the condition that its building materials be shipped in diplomatic pouches, exempting them from U.S. Customs examination.