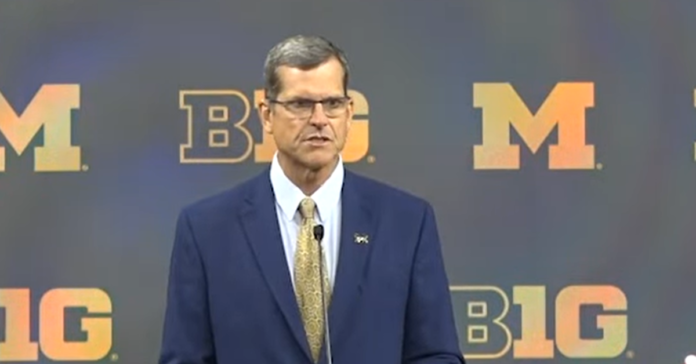 Michigan football coach Jim Harbaugh shamed his critics who ripped him for speaking at a pro-life fundraising event in Michigan, saying he and his wife “we’ll raise that baby” should someone in his family or program have an unplanned pregnancy and is considering an abortion.

“Let that unborn child be born and if at that time, you don’t feel like you can care for it, you don’t have the means or the wherewithal, then Sarah and I will take that baby.

“We got a big house. We’ll raise that baby.”

Jim Harbaugh doubles down on his anti-abortion stance. Offers to raise babies his players, staffers or family members have, but don’t want.

“The abortion issue is one that’s so big that it needs to be talked about. It’s a life or death type of issue.

“And I believe in, and I respect, people’s views.

“But let’s hear them.

“Let’s discuss them because there’s passion on both sides of this issue.

“So when you combine that with respect, that’s when the best results come.

“I’m just contributing to that conversation and that communication, which I think is really important, in my opinion,” he said.

“I believe in having the courage to let the unborn be born,” Harbaugh said at the event last week, according to Detroit Catholic, the news service for the Roman Catholic Archdiocese of Detroit.

“I believe in having a loving care and respect for life and death.

“My faith and my science are what drive these beliefs in me.”

Michigan coach Jim Harbaugh told @GenoEspn that he and his wife Sarah will “raise that baby” should someone in his family or program be involved with an unplanned pregnancy and doesn’t feel like they can take care of the child.
https://t.co/tVVBODokTq