Kid Rock Shows Bruce Springsteen How It’s Done As Outraged Fans Complain About Bruce’s Ticket Prices: “I don’t want to break you by coming to see me, if you give people a fair price, I think they’ll feel better about spending their money” 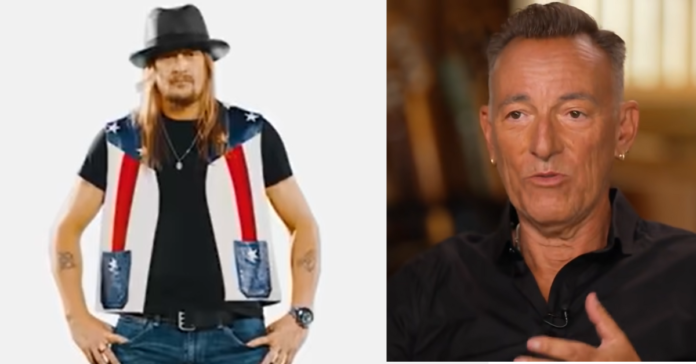 Fans are furious with Ticketmaster and Bruce Springsteen over the high price of tickets for the New Jersey rocker’s latest tour. Seats jumped to $4,000 due to Ticketmaster’s “dynamic pricing program,” for recent Springsteen tickets and fans let Bruce have it on social media.

One said, “Gotta get a 2nd mortgage to get a ticket.” Another said: “Waiting for the quote on selling my kidney to get nosebleed seats.”

According to KHOU: “Ticket broker Kayla Ramsey with Midtown Premium Tickets said primary sellers like Ticketmaster and AXS are now doing exactly what ticket brokers do.

“Many of these tickets are being priced on the primary market the same way scalpers price it on the secondary market, based on supply and demand,” said John Breyault, Vice President, Public Policy, Telecommunications, and Fraud for the National Consumers League.

“That means prices can change from minute to minute.

“My tickets are cheap. That’s right.

“I don’t want to break you by coming to see me.

“I want to make as much money as I can, but I don’t need to drive around in a tinted down Rolls-Royce or Maybach and hide from people because I felt like I ripped them off.

“If you give people a fair price, I think they’ll feel better about spending their money.

“They might spend just as much because they don’t feel like someone is trying to get one over on them.”

“They are not for sale, ” Kid Rock said.

“I’m tired of seeing the old rich guy in the front row with the hot girlfriend.

“And the hot girlfriend, you know, with her boobs hanging out, with her beer in the air, just screaming the whole time.

“The old rich guy is standing there like he couldn’t care less.

When @CrowdedHouseHQ learned about “in-demand” and “premium” tickets being sold for their recent tour, they acted. Over to you, @springsteen! 🎟 https://t.co/N0u06xEJo5

Kid Rock is a patriotic musical genius and Bruce Springsteen is a woke talentless beta male one hit wonder!