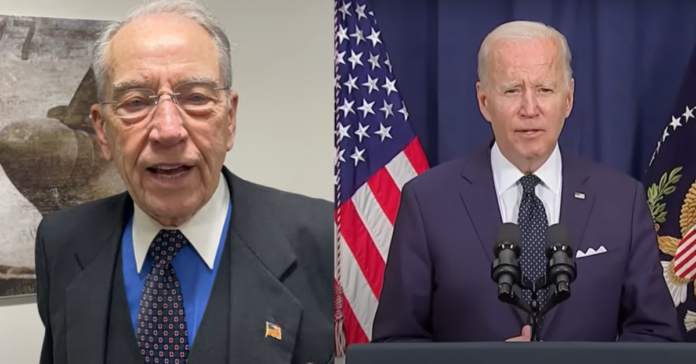 GOP Senator Chuck Grassley turned up the heat on President Joe Biden saying the FBI and Justice Department have been accused by “highly credible whistleblowers” of burying “verified and verifiable” dirt Hunter Biden.

“The aforementioned allegations put a finer point on concerns that I have raised for many years about political considerations infecting the decision-making process at the Justice Department and FBI. If these allegations are true and accurate, the Justice Department and FBI are – and have been – institutionally corrupted to their very core to the point in which the United States Congress and the American people will have no confidence in the equal application of the law,” Grassley wrote in a letter today to Wray and Garland.

Thibault and Richard Pilger, director of the election crimes branch within the FBI’s public integrity section, reportedly were instrumental in the opening of an investigation into the Trump campaign and its associates based in substantial part on information from left-aligned organization.

Thibault allegedly scrubbed and diluted details of the sources’ political bias from a memo seeking the full investigation, which was ultimately approved by FBI Director Chris Wray and Attorney General Merrick Garland.

Whistleblowers claim that Thibault, Pilger and others didn’t always adhere to agency policies in their supervision of various election-related matters, including campaign finance investigations across multiple presidential election cycles.

These claims comport with testimony from former acting Principal Associate Deputy Attorney General Richard Donoghue, who previously told the committee that leadership within the public integrity section and election crimes branch frequently asserted authority they did not have, which frustrated and discouraged investigations.

Whistleblowers further allege that Thibault and other FBI officials sought to falsely portray as disinformation evidence acquired from multiple sources that provided the FBI derogatory information related to Hunter Biden’s financial and foreign business activities, even though some of that information had already been or could be verified.

In August of 2020, FBI supervisory intelligence analyst Brian Auten opened an assessment, which was used by a team of agents at FBI headquarters to improperly discredit and falsely claim that derogatory information about Biden’s activities was disinformation, causing investigative activity and sourcing to be shut down.

That same month, FBI agents provided an unsolicited and unnecessary briefing to Grassley and Senator Ron Johnson (R-Wis.), who were also investigating Biden’s foreign business deals. Details about that briefing were later leaked to the news media in an apparent effort to falsely cast the senators’ investigation, which was based on U.S. government records and testimony from Obama administration officials, as tainted with foreign disinformation.

The FBI headquarters team allegedly placed their assessment findings in a restricted access subfolder, effectively flagging sources and derogatory evidence related to Hunter Biden as disinformation while shielding the justification for such findings from scrutiny. Thibault also reportedly ordered the closure of a stream of information related to Hunter Biden and sought to improperly mark the matter within FBI systems in a way that would prevent it from being re-opened in the future.

The FBI headquarters team allegedly claimed that reporting from the stream was at risk of disinformation. However, whistleblowers claim that all of the information obtained through that stream was already verified or verifiable.

Grassley is seeking records related to Auten’s assessment, derogatory information received by the FBI related to Hunter Biden and an accounting of all leads that were either closed out or denied further review by or at the direction of Thibault.

Grassley frequently hears from current and former government employees who come forward to shine a light on fraud, waste, abuse and gross mismanagement in government agencies or by government contractors. He protects the identities of these sources and frequently promotes policies that shield whistleblowers from retaliation,” the statement said.