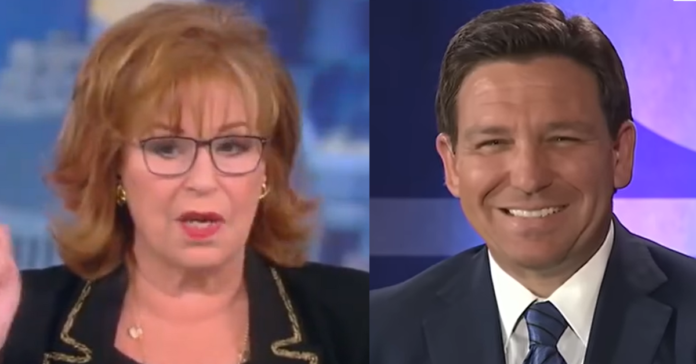 Joy Behar made the astounding claim today that Florida Governor Ron Desantis Joy Behar thinks there are “good people” among Nazis. Her co-hosts tried in vain to clean it up. Joy said:

“Well, DeSantis could take his place and that’s just as bad. I mean, there was a — what do you call it? This Turning Point conference with all the smoke. What are they, smoking something down there? Or it’s, like — whatever.

“Anyway, they were out there. Neo-Nazis were out there in the front of the conference with anti-Semitic slurs, and, you know, the Nazi swastika and a picture of a so-called Jewish person with exaggerated features.

“Just like, like Goebbels did during the Third Reich. Right out of that same playbook, okay? And DeSantis did not say anything about it, nothing.

Without evidence, Joy Behar claims Ron DeSantis thinks there are “good people” among Nazis.
And despite the fact that DeSantis has denounced Nazism, has never supported it, and haters have staged hoax Nazi rallies in the past, The View is trying to tar and feather him with it. pic.twitter.com/jgJldGMcYG

“So it’s sort of his rendition of good people on both sides, same idea. So why trade a headache for an upset stomach?

“Because that’s what’s going to happen if they get rid of Trump and put him in. It’s the same thing.”

“I live in Florida.

“As many issues as I have with DeSantis, I don’t think it’s the same thing because I don’t think DeSantis has been involved in promoting a coup against America and being part of the organization,” she said.

Joy’s co-hosts tried to clean up the mess by reading a statement from Turning Point denouncing the protesters while Whoopi was forced to clarify that the protesters were outside of the event and were not allowed in.”

Shockingly, Ana Navarro sort of defends DeSantis from Behar.”I don’t think Desantis has been involved in promoting a coup against America.”
And bucking the narrative that he’s like Trump, she says “I think Donald Trump is in a class all by himself, thank God.” pic.twitter.com/KpUmO89nJL

Sara Haines was forced to read a legal note to share Turning Point USA’s condemnation of the Nazis.
Whoopi falsely claims TPUSA “let them in” the event and “knew what they were” and called them “complicit.”
In reality, the Nazis were outside the event on the sidewalk, not inside pic.twitter.com/dntnPyelPo

Following a break, Whoopi wanted to “make a quick clarification” that the Nazis were “outside protesters” and claims her point was “metaphorical” suggesting they “embraced them at your thing.”
Behar defended Antifa terrorists and whined they would get a bad rap if they were there pic.twitter.com/JfhAW7tjma

CNN Slams Dems For Promoting MAGA Candidates: “Undercuts the whole argument, they wished to run against Donald Trump in 2016 and look where that got them”