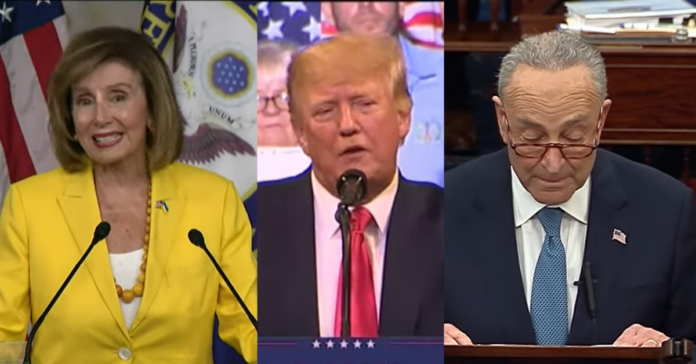 Maryland Gov. Larry Hogan accused the Democrats of ‘unprecedented collusion with Donald Trump’ after the candidate he wanted to replace him lost in the primary to a Trump-backed challenger.

The Democrats have botched the last two years and have nothing to run on but fear. They are claiming GOP candidates, mostly those backed by Trump, are a danger to democracy so people must vote Dem.

But when no one is looking the Dems are helping these Trump-backed candidates in their primaries because they think they will be easier to beat in the general election. If the Dems really believed their rhetoric they would never promote these candidates so…

“It was kind of unprecedented collusion between the Democratic Governors Association and Donald Trump,” Hogan said on ABC’s This Week with Jon Karl. “It’s a big loss for the Republican Party, and we have no chance of saving that governor seat. We actually had a chance if they hadn’t gotten together and done that.”

KARL: I’m going to start with the hearings. We hear that Donald Trump is upset that he doesn’t see Republicans out on television responding to the hearings, defending him. Why – why is that Republican leaders have been essentially silent as these hearings have unfolded?

HOGAN: Well, it’s disappointing. I mean the – the clips that you just showed, that was how they really felt right after it happened. And, since then, there’s been a lot of silence.

But, you know, I was — while people were talking about it, I was actually taking action. While the president was watching television and while the vice president was being whisked off to save his life and members of Congress, I was on the phone with the leaders of Congress. I was calling up the National Guard. I was sending in the Maryland State Police. We were talking to the mayor of D.C. I mean, we were taking action for that whole three hours while the president was watching television.

KARL: And he wasn’t making a single call to do something.

HOGAN: We had security team meetings. We called everybody together. It was, you know, mass chaos. We had the leaders of Congress begging for help. We were sending in the State Police riot team, which were one of the first to arrive after the Metropolitan Police, Maryland National Guard, the first to arrive after D.C. We couldn’t get approval from the secretary of defense. It was crazy.

KARL: What did you think of those outtakes that showed him 24 hours later, still angry, not wanting to condemn the violence, and refusing to say the election was over, on January 7th?

HOGAN: Well, I thought that was, for me — you know, I knew most of the stuff that was — you know, nothing really surprised me except those outtakes I had never seen. And it showed the real thinking, you know. I was saying, you know, that he needed to step aside and let Mike Pence finish out the administration so we can have a peaceful transfer of power. He was, you know, with those outtakes, you could see the anger. You could see exactly what he was thinking. And that was the most moving part of the hearing for me.

KARL: And the final message he did was three minutes long. I’m told it took about an hour for him to get through it…

KARL: … as they were going back and forth.

So — so I want to ask you about what happened in Maryland. You had the Republican primary. You and I had spoken about it, I think it was back in April.

He won, and he won decisively, with Donald Trump’s endorsement. You — you obviously did not endorse him. What — what happened? Why…

HOGAN: Well, it was, kind of, unprecedented collusion between the Democratic Governors Association and Donald Trump. And both of them were promoting a conspiracy theory believing kind of nut job. And DGA, I think, spent about $3 million. The guy only spent $100,000 on his campaign. So it was a win for the Democrats. It’s a big loss for the Republican Party. And we have no chance of saving that governor’s seat. We actually had a chance if they hadn’t gotten together and done that.

KARL: Let’s — let’s play a section of what the Democratic Governors Association, one of the ads that they ran effectively to promote Dan Cox…

KARL: … to Republican voters. Listen to this.

KARL: So, definitely a cynical effort, no question. It arguably worked. He did win. But everything in that ad is true. I mean…

KARL: And you definitely won’t support him. You’ll…

KARL: You also told me, back in April, that these Republican primaries coming up, quote, “are going to determine what the Republican Party looks like.” We’re through a lot of them. It hasn’t…

HOGAN: You know, it’s — look, I said in November, right after — in November of ’20, right after the election, I spoke at the Reagan Institute here in D.C., and I was the first person to say that this is going to be a fight for the heart and soul of the Republican Party and it was going to be a long, tough fight, but that it was — “Time For Choosing” was the name of the speech that I gave.

And we’re not there yet. I mean, it’s — we’re only a year into the battle. We have two more — more than, you know, two years until the next election. But it’s not going to be easy. We’re going to win some; we’re going to lose some. But I think the final chapter, you know, on some of this, will be in November, when we lose some races. You know…

HOGAN: You know, only — I can’t really put myself into the mind of Donald Trump. But I would say it’s 50/50. His — his ego probably, you know, can’t take another loss. After all, he lost to Joe Biden, which is hard to do. But he likes to be the center of attention.

KARL: And what does it mean for these midterm elections if he announces he’s running in the middle of the fall campaign — this fall campaign?

HOGAN: Well, we’ve — we had discussions about that at the Republican Governors Association last week. And I think most people are very concerned about the damage it does to the party if he announces now. And, you know, it may help in very red states or very red districts, but in competitive places and purple battlefields, it’s going to cost us seats if he were to do that.

KARL: And does what happened in Maryland — I mean, it was a loss for you. I mean, you weren’t on the ballot…

KARL: … but it was a loss for you. Does this make you more or less likely to run for president in 2024?

HOGAN: Well, it makes me more determined than ever to continue the battle to win the — you know, win over the Republican Party and take us back to a bigger tent, more Reagan-esque party. Our — we’ve got our work cut out for us. But I’m certainly not giving up.

KARL: All right. Governor Larry Hogan, thank you for joining us.