Ron DeSantis: ‘Put on the Full Armor of God And Take a Stand Against the Left’s Schemes’ 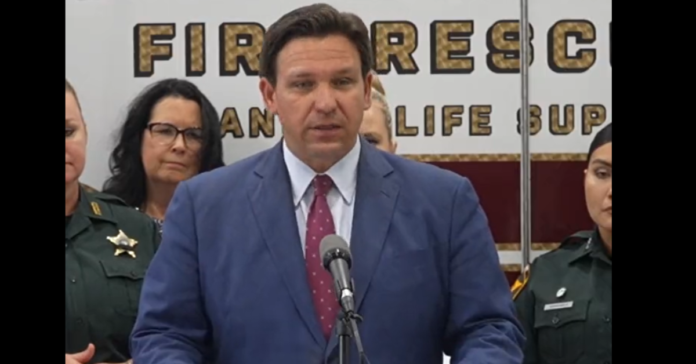 Florida Gov. Ron DeSantis (R) instructed his fellow conservatives how they can beat back the radical left’s schemes by telling the crowd to “put on the full armor of God.”

Ron said: “If you’re running for the legislature, if you’re just a concerned citizen going to a school board meeting, you’re going to a public meeting, standing up and speaking the truth and standing for the right things at this moment in time is not cost free.

“You gotta be ready for battle.

“So put on the full armor of God. Take a stand against the left’s schemes.

“Stand firm with the belt of truth buckled around your waist.

“You will face fire from flaming arrows, but the shield of faith will protect you.

“We’re just getting warmed up. I’ve only begun to fight,

“I’m standing my ground, walking the line all the way through the finish line, and I can tell you this.

“With your help and everybody behind us, there is no doubt in my mind that come November, we are going to keep the state of Florida free,” he said.

“He came in and cranked the printing presses, kneecapped American energy, and he also opened our southern border.

Florida will continue to fight back against Bidenflation. pic.twitter.com/1yPC3kg87g

Biden’s Border Crisis constitutes a catastrophic failure of leadership. While Washington does nothing to stop the flow of illegal immigration into our states, Florida has passed concrete laws to defend our state against the consequences of Biden’s dereliction of duty. pic.twitter.com/g9FxiLCIp6

[VIDEO] For The 4th Time, Biden's "COVID" Symptoms Change, Many Say It Sounds Like He's Declining

Fox News’ Ainsley Earhardt Calls For Hearings On The Riots During Summer of 2020: “Where are the hearings for all those riots?”