Adam Schiff Reaches Limit With Biden’s Slow Response To New Crisis: “I want to light a fire under the administration and get them to make sure that we up production, that we up distribution” 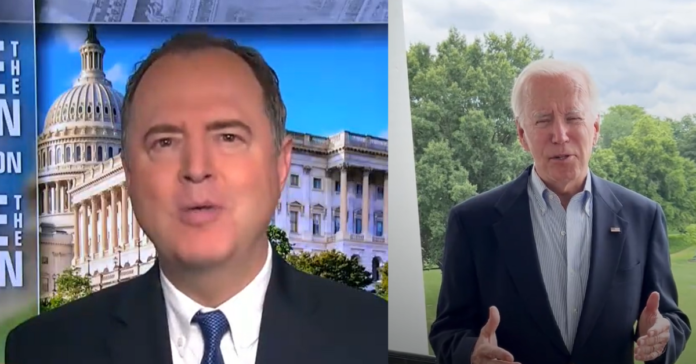 Once is an accident, twice is a coincidence, but three times is a pattern and the pattern says President Joe Biden is a complete and total failure. It defies logic that he and his team make the same mistake over and over again but it is true.

And that is the most frustrating part of watching Biden fail – the whole world knows what to do because there aren’t hard issues yet Biden continues to blow them.

Take the new crisis Biden is mismanaging, the monkeypox outbreak. We don’t have enough vaccines here but there is plenty of supply in Europe but those vaccines can’t clear our bureaucracy.

The same thing happened with the baby formula crisis. Our complex regulations blocked European formula imports even thought they were as good or better than ours.

It took a national outcry for Biden to simply tell the FDA to make an exception.

Which is what he will have to do with the monkeypox vaccine because people are suffering and now Dems like Adam Schiff are sounding the alarm.

We reported on this weeks ago and if we knew, Biden knew. Total fail. Again.

Representative Adam Schiff (D-CA) went on CBS’s “Face the Nation” today and took a swipe at President Joe Biden and his team of fools for botching and turning a minor, solvable issue into a national crisis.

MARGARET BRENNAN: Before I go further on January 6, I do want to quickly just button up what Dr. Jha addressed in regard to that letter you wrote this week in regard to monkeypox.

You said the federal response falls short in terms of supply and timeliness regarding a vaccine.

The current supply accounts for only three and a half million residents. Some shipments are not even expected to arrive until 2023. Why do you think the federal response is failing when Dr. Jha says it’s contained and under control?

SCHIFF: I don’t know why there aren’t more vaccines available. I’m hearing from health care providers in my district that there are people lining up to get vaccinated, and they don’t have the vaccines for them, and that is a real problem.

As I think you indicated, we really don’t know the future course of this virus. But what we do now, early on, just as was the case with the pandemic, will determine just how bad this may get.

And so I want to light a fire under the administration and get them to make sure that we up production, that we up distribution and that people that are ready and willing and able to get vaccinated have the ability to protect themselves.

The Biden admin. says it has Monkeypox under control, but Rep. Adam Schiff says the federal government’s response has fallen short.

“I want to light a fire under the administration and get them to make sure that we up production, that we up distribution,” he tells @margbrennan. pic.twitter.com/SKQ89AglT9

If You Think That 81-Million Number Doesn't "Add Up," THIS Will Really Make You Go "Hmmm"