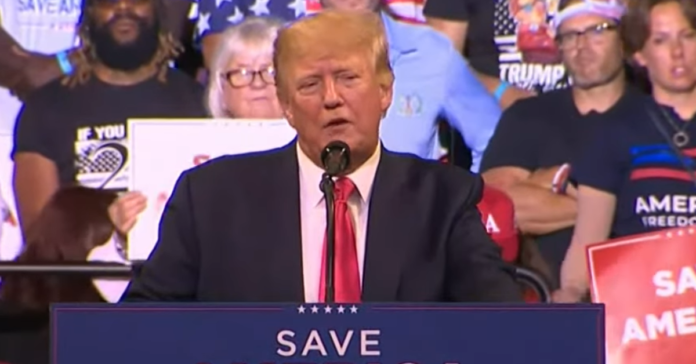 Biden scrapped the order when he came in but Trump and his team, should they win a second term, plan to bring it back with a vengeance. And unlike Trump’s first term where he picked too many swamp creatures for his admin because his team only had a few months to staff up, Trump and his allies are pre-vetting candidates they want to place in his second administration.

Andrew Kloster worked on the effort. He has spoken publicly about what they are doing saying they don’t want people ‘chasing a long-term career in Washington or anyone interested in maintaining a good reputation with the business community, K Street, or GOP leaders on Capitol Hill.’

“You hear about what jobs come with perks, and traveling a lot and networking with the ‘Davos set’ is not something someone genuinely civic-minded would angle for,” Kloster said.

They want people who felt wronged by the system because they would be least likely to fall prey to the temptations of being a DC insider.

“It’s not just that being ‘canceled’ motivates a person, it’s also that being canceled indicates a person knows the kind of heat that is brought to bear by the media, by institutions, and the public, and is probably better able to fight when the time comes,” he said.

Trump’s spokesman Taylor Budowich said: “There are many people who want to see President Trump return to the White House, and the polls show that he is in a dominant position for 2024.

“However, anyone performing the important research and vetting that this story described is doing it at their own discretion.”

Former President Trump’s top allies are preparing to radically reshape the federal government if he is re-elected, purging potentially thousands of civil servants and filling career posts with loyalists to him and his “America First” ideology, people involved in the discussions tell Axios.

The impact could go well beyond typical conservative targets such as the Environmental Protection Agency and the Internal Revenue Service.

Trump allies are working on plans that would potentially strip layers at the Justice Department — including the FBI, and reaching into national security, intelligence, the State Department and the Pentagon, sources close to the former president say.

During his presidency, Trump often complained about what he called “the deep state.”

The heart of the plan is derived from an executive order known as “Schedule F,” developed and refined in secret over most of the second half of Trump’s term and launched 13 days before the 2020 election.

Trump 2025: The preparations are far more advanced and ambitious than previously reported.

The reporting for this series draws on extensive interviews over a period of more than three months on preparations for a potential second Trump term. https://t.co/x39E2Jg8nX

.@jonathanvswan‘s exclusive reporting series, Inside Trump’25, details how the former president could gut the federal bureaucracy in a potential second term. https://t.co/mGON2wGRCz

Adam Kinzinger: Children of Trump Supporters Will Grow Up 'Ashamed' of Parents