Steve Bannon Found Guilty By Jury Of Contempt Of Congress, Will Be Sentenced Oct. 21 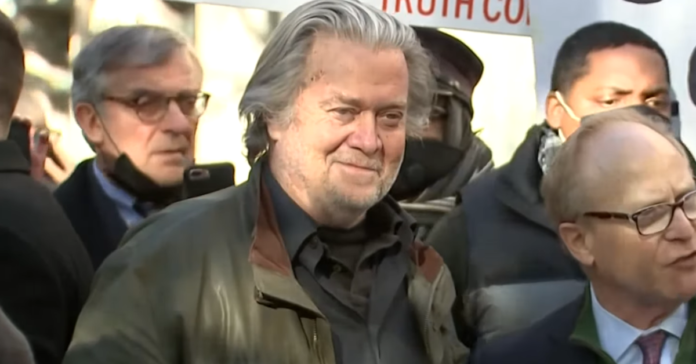 A federal jury just found Steve Bannon guilty of two counts of contempt of Congress for defying a subpoena from the House select committee investigating the Jan. riot. US District Judge Carl Nichols has set Steve Bannon’s sentencing for Oct. 21.

Bannon smiled as the jury read the verdict according to media reports. He did not put on much of a defense. Bannon faces a minimum sentence of 30 days in jail, according to federal law, and could get one year in prison for each count.

Bannon’s lawyers offered no defense witnesses. Evan Corcoran, one of Steve’s lawyers said, “We didn’t feel the need to put on a defense.”

“He’s wanted to testify publicly in this case under oath to tell the court, the jury and the public exactly what the true facts of the case are.

“However, on the advice of counsel he has decided not to testify, because he understands that he would be barred from telling the true facts explaining why he did what he did, and why he did not do what he did not do in relation to the committee’s subpoena.

“He wanted to testify under oath to explain that at all times, he believed he was doing what the law required him to do, based on his lawyer’s advice.”

“This case is not complicated but it is important,” Molly Gaston, an assistant U.S. Attorney, said in her closing argument Friday.

“When it came down to it, he did not want to recognize Congress’s authority or play by the government’s rules.”

The two misdemeanor counts each carry a minimum of 30 days and a maximum of one year in jail, as well as a fine of $100 to $100,000. Bannon is the first close Trump aide to be convicted as a result of the committee’s probe.

The Department of Justice in closing arguments of the trial said that Bannon “chose allegiance to Donald Trump over compliance to the law,” CNN reports.

Bannon’s lawyers had argued that the committee’s deadlines were flexible and claimed the subpoena and prosecution’s case were politically motivated.

The jury deliberated for less than three hours before reaching a unanimous verdict.

BREAKING: Steve Bannon, a longtime ally of former President Donald Trump, has been convicted of contempt of Congress after defying subpoenas from the Jan. 6 committee. He faces up to two years in prison when he’s sentenced. https://t.co/wP0oHT2Yy4

Oh Good Grief, How Will Jill and Joe Explain Yet Another Messy Hunter Divorce?

[VIDEO] Jill Biden Smiles, Waves, and Thanks a Man Who Tells Her Joe is WORST "President" in US History