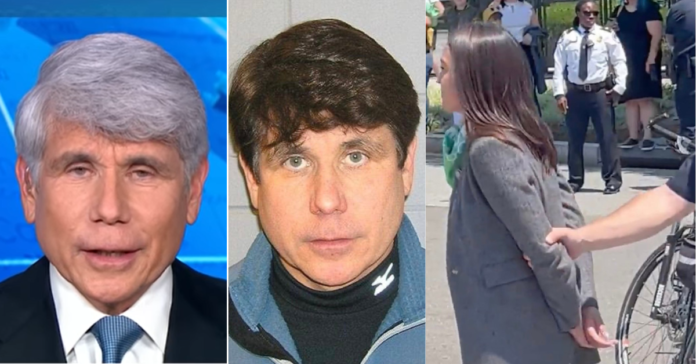 “How do you properly thank someone who’s given you back the freedom that was stolen from you?”  Blagojevich said at the time. “Doing this does nothing to help his politics.”

“President Trump is a man who is tough and outspoken, but he also has a kind heart. And this is an act of kindness and I believe it’s the beginning of a process that — to actually turn an injustice into a justice,” he added.

AOC showboated her arrest for protesting the Supreme Court but Blago wasn’t buying it.

AOC was arrested along with other members of congress including Rashida Tlaib, Ilhan Omar, and Carolyn Maloney.

They wore specially-made green bandanas that said ‘Won’t Back Down.’ They marched from the Capitol to the Supreme Court and within minutes were ordered to “cease and desist.” They did not and chanted, “the people, united, will never be divided.”

The US Capitol Police said at the time: “Demonstrators are starting to block First Street, NE. It is against the law to block traffic, so officers are going to give our standard three warnings before they start making arrests.”

“Multiple members of Congress, including @AOC, being arrested by Capitol Police for blocking traffic outside the Supreme Court in abortion rights demonstration. The group also includes the assistant House speaker, Katherine Clark.

“We made a total of 34 arrests for Crowding, Obstructing or Incommoding (DC Code § 22–1307). That arrest number includes 16 Members of Congress.”

CNN reported the below were among the arrested:

Multiple members of Congress, including @AOC, being arrested by Capitol Police for blocking traffic outside the Supreme Court in abortion rights demonstration: pic.twitter.com/fysQN1oBAw

If Hunter Biden Is Indicted; The Old Man "By Connection" Would Be A National Security Risk