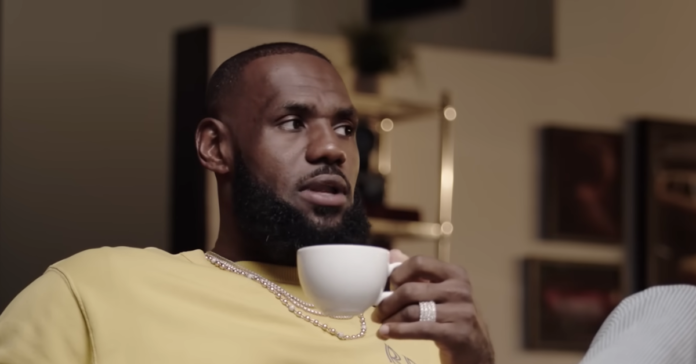 On the latest episode of HBO’s “The Shop,” NBA star LeBron James was asked if he was concerned about choking in the big moment and missing the last shot.

James has faced questions for not being as clutch as Kobe or Michael Jordan when taking game-winning shots. James said “No, maybe when I was younger because I cared what everybody else thought. I don’t give a f*ck now.

“It probably changed to me about 25. I spent like seven years and then I went to Miami that first year and everything was about still what everyone else thought.

“And then I just literally was like, ‘I don’t give a f*ck what nobody think. I’m him.’ If I don’t take it, who’s going to take it?

“You know, it’s not even taking a shot. It could be making the right play,” James said.

Maverick Carter asked, “In basketball, there are fans when you play away that can literally take the game from you, and the fans is not going to let us win this one tonight what place?”

James, who is a part owner of the Boston Red Sox, said:

“Because they racist as f*ck, that’s why.

“They will say anything, and it’s fine.

“I mean, f*ck, it’s my wife, she’s been dealing with them her whole life.

“I don’t mind it. I hear it, if I hear someone close by, I check them real quick.

“I move onto the game, whatever the f*ck.

“They going to say whatever the f*ck they want to say.

“I got a beer thrown on me leaving a game.

“It’s like a ‘F*ck LBJ’ t-shirt. I believe they probably sold it at the f*cking team shop.”

I don’t give a f*ck what nobody think. I’m him.” 😤 @KingJames didn’t mince words when describing his mindset. New episode of #TheShop available now. 💈