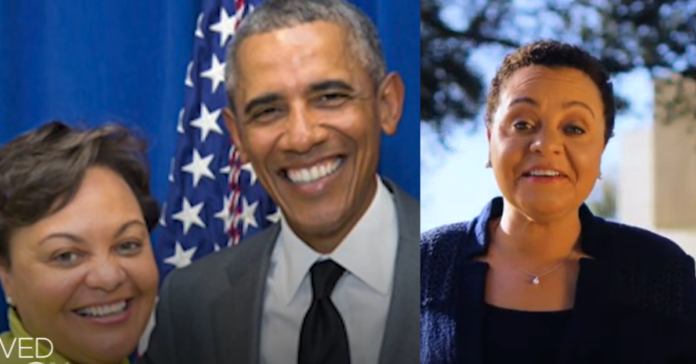 A Democratic candidate backed by the Black Lives Matter PAC this election cycle has been charged with wire fraud. Karen Carter Peterson is a former Louisiana State Senator and chair of the state political party.

According to court documents, PETERSON served as a Louisiana State Senator for the 5th District from about 2010 until about April 8, 2022, and as the Chair of State Political Party A between about 2012 and 2020.

As a Louisiana State Senator, PETERSON formed and maintained a campaign organization, the “Karen Carter Peterson Campaign Fund (“KCPCF”),” to solicit and raise campaign funds from individual and corporate donors.

The campaign funds were solicited based upon  the representations and premise that the funds would be used to facilitate PETERSON’S reelection for the position of State Senator.

In furtherance of her scheme,  PETERSON diverted, and caused her friends and associates to divert, campaign funds from the KCPCF to PETERSON’S personal use for the purpose of obtaining and using money and property from contributors to the KCPCF by means of materially false and fraudulent representations and promises for nearly seven (7) years.

She did so by writing checks drawn on the KCPCF account to her friends and associates and directing them to cash the checks and then to give most or all of the proceeds to her.  PETERSON used the funds to pay for personal expenses unrelated to her campaign or the holding of public office, including to pay gambling-related expenses, and, in the course of soliciting additional contributions, failed to disclose to potential contributors that PETERSON had already used funds contributed to the KCPCF for her personal benefit.

Further, PETERSON caused the public filing of false and misleading campaign finance reports that mischaracterized expenditures as being for legitimate purposes related to her campaign or the holding of public office, but were, in fact, unrelated to  such purposes and, instead, were diverted to PETERSON’S personal use.

PETERSON then directed the Companies to remit a portion of the funds paid to them by State Political Party A to PETERSON through either checks drawn on the accounts of the Companies or in cash.

If convicted, PETERSON faces a maximum term of twenty (20) years in prison, a fine of up to $250,000.00, up to three (3) years of supervised release after imprisonment, and a mandatory $100 special assessment fee.

The United States Attorney’s Office reiterated that a bill of information is merely a charge and that the guilt of the defendant must be proven beyond a reasonable doubt.

The United States Attorney’s Office  praised the work of the Federal Bureau of Investigation, the Internal Revenue Service – Criminal Investigation, and Forensic Accountant Josephine M. Beninati, CPA, CFE in this matter and thanks the Metropolitan Crime Commission for its assistance.  Assistant United States Attorneys Jordan Ginsberg, Chief of the Public Corruption Unit, and Jonathan L. Shih are in charge of the prosecution,” DOJ said.

Today marks an important step in my life-long recovery as I continue to address my gambling addiction. I sincerely apologize for the impact from my compulsive behavior resulting from this addiction. (1 of 2)#gamblingrecovery #makingamends

I have made full repayment of funds used as a result of my addiction and I will continue to make amends.
Staying true to the steps of my ongoing recovery, I have been forthright, honest,and fully cooperative with the US Attorneys’ Office in their investigation. #gamblingrecovery