Alan Dershowitz Says Bannon Has Good Chance To Win Appeal Because “In The District of Columbia, 80%-90% of The People Hate Trump or Anybody Who Worked With Him” 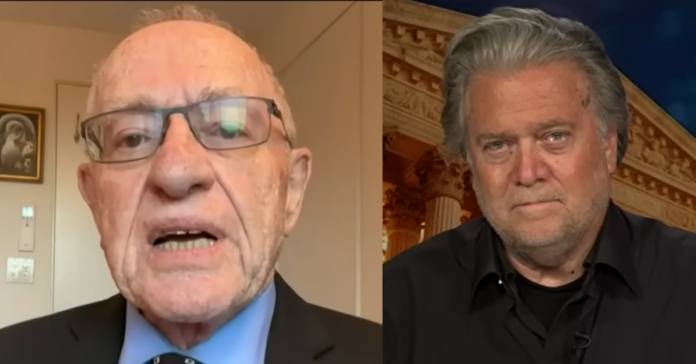 Constitutional lawyer, and professor of law emeritus at Harvard Law School, Alan Dershowitz told Newsmax that Steve Bannon has a good chance of getting his criminal contempt of Congress conviction overturned on appeal.

Dershowitz said: “There was never a chance he could be acquitted for two reasons. First, in the District of Columbia, 80%-90% of the people hate Trump or anybody who worked with him. No. 2, the judge took away all of his defenses.”

“His defense was Bannon believed that he had an obligation not to speak to the committee because of executive privilege.

“But to go immediately to prosecution is ‘Alice in Wonderland’ justice,” he said.

“I stand with Trump and the Constitution,” Bannon said after the guilty verdict.

“I will never back off that.”

“You will see this case reversed on appeal. You will see all of these resources, three federal prosecutors, four FBI agents for a misdemeanor are being wasted.

“You cannot find another crime in which, misdemeanor or felony, in which a person is convicted without believing or knowing or having reason to believe he or she did anything wrong.”

Leaving the federal courthouse in Washington, D.C., where his trial had been held, Bannon denounced the Jan. 6 committee — which has held a series of high-profile hearings in recent weeks — as “gutless.”

The committee, for its part, praised Bannon’s conviction as “a victory for the rule of law.” It had asked him to testify about his knowledge of the events on Jan. 6, and to produce documents that could shed light on how the violent riot was organized and planned. Bannon was present at meetings at the Willard Hotel on both Jan. 5 and 6 that investigators say were used to plan the “Stop the Steal” rally, which turned violent.

He refused to do so, setting up a showdown with the federal government that culminated in Friday’s verdict. But there was little contrition or reflection from Bannon or his supporters, even as sentencing looms in late October.

The Justice Department told jurors during the trial that Bannon didn’t turn over documents and testify before the Jan. 6 committee when he was required to do so in October 2021 because he thought he was “above the law.” The prosecution called two witnesses — a Jan. 6 committee staff member and a FBI special agent — and rested its case on Wednesday.

Bannon and his lawyers made clear Friday they planned to appeal, with attorney David Schoen describing the verdict as “round one” in a longer battle.

Professor Alan Dershowitz told Newsmax Saturday that Stephen Bannon, adviser to former President Donald Trump has a good chance to get his criminal contempt of Congress conviction overturned because the “judge took his defenses away.” https://t.co/i4S0IDNrId

Wake Up America! Dems Are Trying To Federalize Control Over State Election Boards