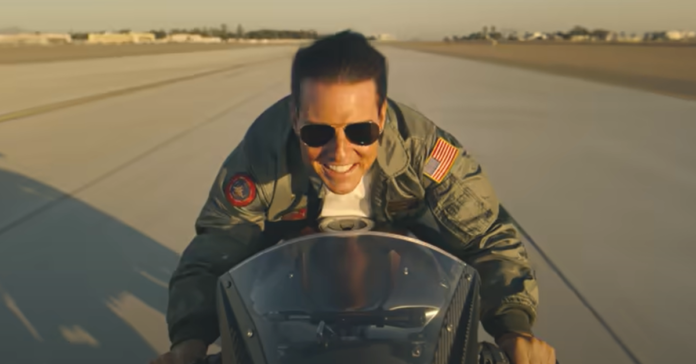 Tom Cruise has starred in many hit movies but his sequel to Top Gun just broke a box office and personal record for Tom Cruise after it passed $1 billion in worldwide ticket sales. This is the first movie with Cruise to pass the $1B mark.

Top Gun: Maverick is Paramount’s biggest live-action movie in 15 markets; the U.K., Australia, France and Brazil. It is the studio’s highest-grossing original release at the domestic box office behind Titanic.

According to The Hollywood Reporter: “Director Joseph Kosinski’s film passed the barrier after finishing Sunday with an estimated domestic total of $521.7 million and $484.7 million overseas for a global cume just north of $1 billion.”

“Top Gun: Maverick enjoyed a boost in its fifth weekend thanks to being rereleased in select Imax and premium large-format screens.

“The Paramount and Skydance release grossed $30.5 million domestically and $44.5 million overseas for a weekend total.”

“With another $484.7 million at the international box office, “Maverick” has grossed $1.006 billion worldwide.

“Those ticket sales were enough to overtake Disney’s Marvel adventure “Doctor Strange in the Multiverse of Madness” ($943 million) as the highest-grossing movie of the year at the global box office.

“Over the extended holiday, the film earned $160.5 million in its first four days of release, marking the first movie in Cruise’s 40-year career to surpass $100 million in a single weekend.

“According to Paramount, repeat customers and Imax screens have been fueling momentum in the weeks since its debut.”