Trump Puts Ron DeSantis On Notice, Says He’d Beat Florida Gov In 2024: “If I faced him, I’d beat him like I would beat everyone else” 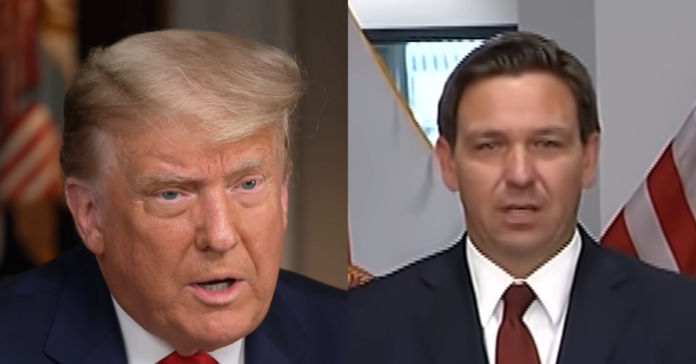 Former President Donald Trump put Florida Governor Ron DeSantis and other GOP 2024 hopefuls on notice saying he will beat DeSantis if both men run before adding that if Trump enters the race he believes he will clear out the field.

Speaking to Yahoo Finance Trump said of a possible showdown with the Florida governor in the GOP presidential primary: “If I faced him, I’d beat him like I would beat everyone else. “I don’t think I will face him I think most people would drop out, I think he would drop out.”

“If I do run, I think that I’ll do extremely well,” Trump said because of good polling and the “enthusiasm” from voters.

DeSantis has been saying all the right things, mainly that he is focused on his is reelection in 2022: “I’m not considering anything beyond doing my job we’ve got a lot of stuff going on in Florida.”

But with Biden basically a lame duck after one year and Kamala showing no signs of rising to the occasion, the GOP pick will be the favorite in the race.

And the Dem primary may get rough and nasty with such weak leaders which would be a huge advantage to the eventual GOP nominee.

The governor said he is focused on Florida right now and has his eye on other elections in the Sunshine State besides the gubernatorial one.

“We’ve got school board races and I want to make sure people are not supporting critical race theory,” he told Hannity, “making sure parents have the ability to send their kids to school the way they want to. There’s a whole lot of huge issues.”

DeSantis, an outspoken ally of former President Trump, has raised a national profile in recent years and is speculated to be a top contender to run for the Republican Party’s 2024 presidential nomination.

Trump himself has repeatedly come right up to the line of announcing a bid. Last month, he toyed with his ex press secretary Sean Spicer, by declining to comment to a 2024 run, “but I will tell you I think you will be very happy Sean.”

During his discussion with Yahoo Finance, Trump repeated that he was still weighing his options, and often returned to an economic message that could be featured in an election campaign.

He noted multiple times during the conversation that the economy had been “really getting ready to rock” before the COVID-19 pandemic and subsequent recession. “We did a job that nobody’s done and had COVID not come and interrupted: we had the greatest economy.”

Yet as ever, the former president stretched the truth when listing his economic accomplishments. One example was when he cited the 2017 Tax Cuts and Jobs Act as the “largest tax cuts in history,” a claim he’s made for years that fact checkers have often noted isn’t true.

Measured as a percentage of gross domestic product, Trump’s tax cuts could end up being only the eighth largest in U.S. history.

In any case, Trump is clearly primed to stoke speculation about his 2024 plans. His next steps include a trip to Iowa, planned for next weekend.

Jim Jordan: President Trump, he’s gonna run again.
Pete: You think so?
Jordan: I know so. Yeah, I talked to him yesterday. He’s about ready to announce after all of this craziness in Afghanistan… pic.twitter.com/Ndogdm7Ipl