Trump Issues Warning To Joe Biden About Denying Executive Privilege: “This will put the current White House in a terrible position when the inevitable request for information comes” 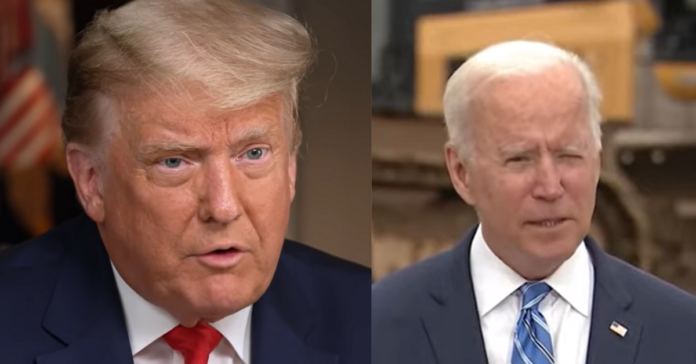 “After my consultations with the Office of Legal Counsel at the Department of Justice, President Biden has determined than an assertion of executive privilege is not in the best interests of the United States, and therefore is not justified as to any of the Documents,” White House counsel Dana Remus wrote.

Enter former President Donald Trump who warned Joe Biden that what goes around comes around.

He told Biden that he is weakening the ability of the office of the president to use executive privilege in the future, which Biden will regret as soon as the GOP takes the House in 2022.

“Biden has rejected our request to withhold White House information from the House Unselect Committee investigating the January 6th protest.

“This will put the current White House in a terrible position when the inevitable request for information comes concerning the massive corruption by Hunter Biden and the already well-documented crimes committed by the Biden family, the least of which are Hunter’s paintings selling for as much as $500,000 apiece.

“With our Country collapsing, with our Military disgraced, with our Borders nonexistent, when will the American people have had enough?”

Biden’s decision triggers a window of at least 30 days for Trump to challenge the determination in court before the National Archives releases them to the Jan. 6 panel, experts have told POLITICO.

It mirrors a similar decision made by Biden and his DOJ earlier this year to waive privilege and and allow former Trump DOJ officials to testify before congressional committees about the former president’s attempt to overturn the 2020 election.

In a Friday letter addressed to Ferriero obtained by POLITICO, Trump said the records sought by the committee would contain information shielded by “executive and other privileges, including but not limited to the presidential communications, deliberative process, and attorney-client privileges.”

Trump indicated that he wished to assert privilege over 45 specific documents identified by the National Archives as responsive to the committee’s request.

Referring to the Presidential Records Act, Trump wrote, “I hereby make a protective assertion of constitutionally based privilege with respect to all additional records.”

He said if the committee seeks other information he considers privileged information, “I will take all necessary and appropriate steps to defend the Office of the Presidency.”

The investigation sets up a unique clash, pitting the current administration against its predecessor.

Since Biden now holds the office of the presidency, he will make the call on some of Trump’s privilege claims.

And while Biden has accommodated the first requests from Congress, the White House has said it will review new claims on a “case by case basis.”

The final word may not rest with Biden, but the courts, if Trump decides to litigate – which is expected – or if the House votes to hold any of the witnesses in contempt of Congress.

In the case of a House contempt vote, the Justice Department would then decide whether to prosecute.