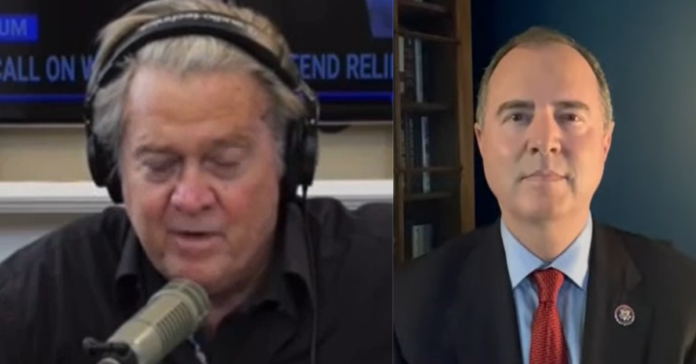 Former Trump adviser Steve Bannon told Adam Schiff and the House Democrats to go pound sand over their subpoena’s saying he will not comply. The Jan 6 committee has been issuing subpoenas and Trump has been fighting them with a claim of executive privilege.

CNN is reporting that Bannon responded to the House Dems by the deadline but said he ‘stands with Trump’ and will dare them to charge him with contempt.

Many on the left think the Department of Justice can arrest Bannon for defying the subpoena but they are dreaming.

Trump has legitimate claims of executive privilege that will be decided by the courts so the left will be disappointed again.

Steve Bannon has informed the House committee investigating the US Capitol riot that he will not cooperate with their subpoena to provide related documents, according to a source familiar with the matter.

The source characterized Bannon’s response as saying he “stands with Trump.”

The source would not characterize Meadows’ response. It is not clear if the two others — Kash Patel and Dan Scavino — have responded.

An attorney for former president Donald Trump, in a letter reviewed by The Washington Post, instructed former advisers, including Mark Meadows, Kash Patel, Dan Scavino and Stephen K. Bannon, not to comply with congressional investigators who have requested information about their activities related to the Jan. 6 insurrection.

The group of former White House aides were subpoenaed last month by the House select committee investigating the Jan. 6 insurrection, seeking records and testimony by midnight Thursday. The bipartisan panel is investigating the storming of the Capitol by a pro-Trump mob trying to stop the certification of Biden’s electoral college win, an attack that resulted in five deaths and left some 140 members of law enforcement injured.

Trump’s legal team argued in the letter, which was first reported by Politico, that records and testimony related to Jan. 6 are protected “from disclosure by the executive and other privileges, including among others the presidential communications, deliberative process, and attorney-client privileges.”

An attorney for Trump has instructed former advisers, including Mark Meadows, Kash Patel, Dan Scavino and Steve Bannon, not to comply with the Jan. 6 committee’s document subpoenas. https://t.co/A23oWkDjGl

WATCH: Maricopa County admits they deleted election data from drives before giving it to auditors