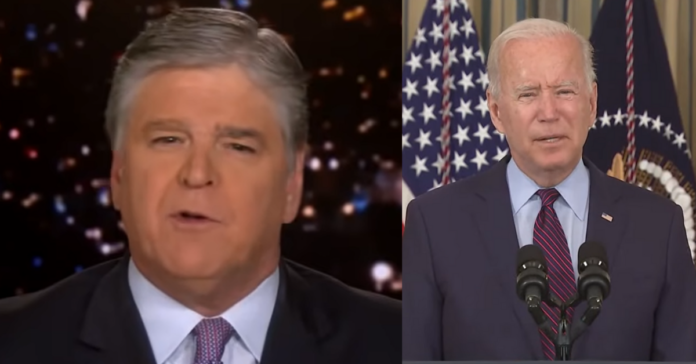 Fox News host Sean Hannity called out President Joe Biden after he shockingly told reporters that the harassment of Democratic Sens. Joe Manchin and Kyrsten Sinema is just “part of the process.”

When asked for a response to the horrific incidents, Biden said: “I don’t think they’re appropriate tactics, but it happens to everybody. The only people it doesn’t happen to are the people who have Secret Service standing around them,” Biden said. “So, it’s part of the process.”

Sean Hannity said: “You won’t stick up for your fellow senators. I guess it’s all part of the process. Getting videotaped in a bathroom stall. Is that part of the process you support? What happened to standing up for a woman’s right to privacy?

“What about showing up at someone’s house and shouting them down where they live?

“That’s part of the process?

“What if someone came to your basement during your mid-day nap?

” Mob rule is never part of the process but that’s right, you wouldn’t even talk about the riots in the summer of 2020.

“Democrats only want to talk about January 6th.

“They don’t want to talk about the riots that killed dozens of Americans, injured thousands of cops, pelted with bricks and rocks and bottles and Molotov cocktails and people, dozens of people killed,” he said.

Even CNN agrees. From CNN:

The video is striking: Protesters angry about Arizona Democratic Sen. Kyrsten Sinema’s opposition to the $3.5 trillion social safety net package currently being considered by Congress follow her into a bathroom to make their point — filming Sinema as she enters a stall.

The video, which runs almost 2 minutes, spends much of its time showing the stall where Sinema is.

The senator never engages with the protesters — verbally or otherwise.

Though only uploaded to Twitter on Sunday afternoon, the video has already been viewed more than 4.7 million times. Which, for the people who followed Sinema to the bathroom, will look like success.

As will the plaudits they received from some corners of liberal Twitter who are enraged with Sinema’s opposition to a higher price tag for a budget bill that contains the bulk of President Joe Biden’s major first term agenda items.

While it may look like a victory, it is not one. It is, in fact, a defeat. Because tactics like these — whether used against Republicans or Democrats — is confrontation culture taken too far.

It is simply not productive to follow an elected official into the bathroom — videoing all the way — to make your point.

You can wait outside. She can’t stay in the bathroom forever.

Back in Jan, Biden told staffers that he would “fire you on the spot” if you didn’t treat others with respect.

When asked about the tactics of activists harassing Sen. Sinema in bathroom he very softly criticized and downplayed as “part of the process.”pic.twitter.com/IroUgc4URZ

Dem Mayor Pleads Guilty To "Knowingly and Willingly Accepting Excess Campaign Funds In Violation of Election Law," Will Resign As Part Of Deal With Prosecutors