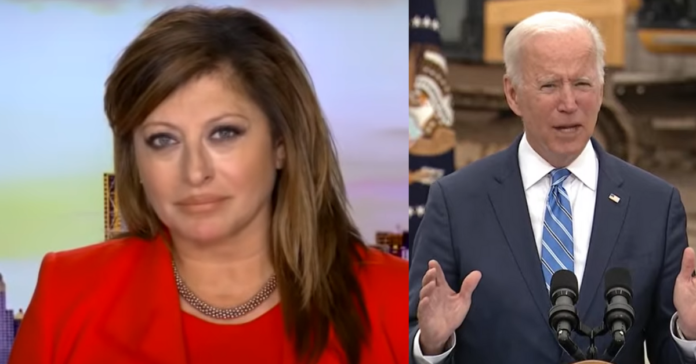 Maria said: “Well, unfortunately, there are 11 million jobs, but employers can’t get the people to come back to work to take the jobs. So you can have all the jobs in the world but if an employer actually can’t find that skilled person to put in that job, you’re out of a job and you’re out of a person getting that job.

“So that’s why I’m focusing on this labor participation rate. It sounds complicated. It’s not. 61 percent of those people are actually participating.

“That means they’re either looking for a job or they’re in the workforce right now.

“This is the number that sticks out to you in this report because it underlines the negative impact of all of that stimulus being thrown at people, even though the extended unemployment benefits went away.

“They’re still saying I’m not ready to go back to work, I’ve got enough money and I’m expecting more money to come at me, creating this welfare state. Not good.

America’s economic recovery has hit a roadblock: US employers added only 194,000 jobs in September, another troubling sign that Covid is disrupting the economy.

It marked the second-straight month in which the US economy added far fewer jobs than expected. Jobs growth slowed down dramatically in August.

And the report did have some good news: The disappointing August report was revised higher by 131,000 jobs, which means employers added 366,000 the month before last. (Even so, the August report remained far below analysts’ initial expectations.)

CNN on the September jobs report: “The worst of the year”

There have been calls to fundamentally change America – its happening! We are a nation that used to love and appreciate work now we refuses to work or can’t because of forced mandates and restrictions.

Who is REALLY in Charge of the Biden Presidency? [Video]