Kayleigh McEnany Calls Out Biden: “Parents have found their voice and that is unacceptable to the Biden administration” 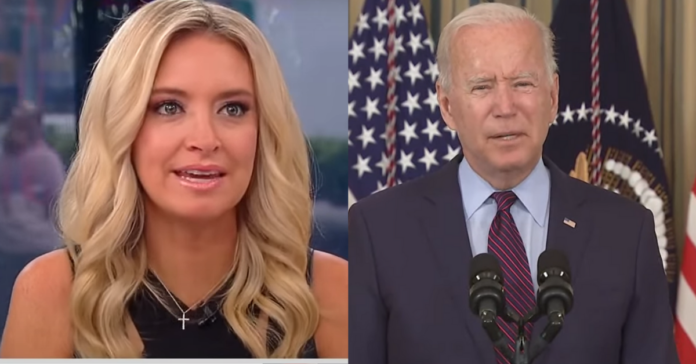 Kayleigh McEnany called out the Biden administration after the Department of Justice (DOJ) announced it would probe threats targeting school board members around the nation after the National School Boards Association lodged a complained.

She said: “Here is what is at the root of this. Parents have found their voice and that is unacceptable to the Biden administration. Parents are the problem, what they say, what they think.

“Look, let’s be honest, the vast majority of parents are not committing any sort of violence or threat against school boards. But Terry McAuliffe, the Democratic gubernatorial candidate, he said the quiet part out loud.

“And the corollary question to this: are the FBI and DOJ going to look into school board members who threaten parents? Remember, we talked about that Loudoun County Facebook group that was doxing parents, threatening them with hacking.

“There was that San Marcos school teacher who dared parents to come at her. So are they going to investigate the opposite? If I did take an educated guess, I would say no,” she said.

she was responding to Attorney General Merrick Garland who said in a memo: “In recent months, there has been a disturbing spike in harassment, intimidation, and threats of violence against school administrators, board members, teachers, and staff who participate in the vital work of running our nation’s public schools.

“While spirited debate about policy matters is protected under our Constitution, that protection does not extend to threats of violence or efforts to intimidate individuals based on their views.

“Threats against public servants are not only illegal, they run counter to our nation’s core values. Those who dedicate their time and energy to ensuring that our children receive a proper education in a safe environment deserve to be able to do their work without fear for their safety.

“The Department takes these incidents seriously and is committed to using its authority and resources to discourage these threats, identify them when they occur, and prosecute them when appropriate.

“In the coming days, the Department will announce a series of measures designed to address the rise in criminal conduct directed toward school personnel. Coordination and partnership with local law enforcement is critical to implementing these measures for the benefit of our nation’s nearly 14,000 public school districts.

“To this end, I am directing the Federal Bureau of Investigation, working with each United States Attorney, to convene meetings with federal, state, local, Tribal, and territorial leaders in each federal judicial district within 30 days of the issuance ofthis memorandum. These meetings will facilitate the discussion of strategies for addressing threats against school administrators, board members, teachers, and staff, and will open dedicated lines of communication for threat reporting, assessment, and response.

“The Department is steadfast in its commitment to protect all people in the United States from violence, threats of violence, and other forms of intimidation and harassment.”

Citing an increase in harassment, intimidation and threats of violence against school board members, teachers and workers in our nation’s public schools, today Attorney General Merrick B. Garland directed the FBI and U.S. Attorneys’ Offices to meet in the next 30 days with federal, state, Tribal, territorial and local law enforcement leaders to discuss strategies for addressing this disturbing trend. These sessions will open dedicated lines of communication for threat reporting, assessment and response by law enforcement.

“Threats against public servants are not only illegal, they run counter to our nation’s core values,” wrote Attorney General Garland.

“Those who dedicate their time and energy to ensuring that our children receive a proper education in a safe environment deserve to be able to do their work without fear for their safety.”

According to the Attorney General’s memorandum, the Justice Department will launch a series of additional efforts in the coming days designed to address the rise in criminal conduct directed toward school personnel.

Those efforts are expected to include the creation of a task force, consisting of representatives from the department’s Criminal Division, National Security Division, Civil Rights Division, the Executive Office for U.S. Attorneys, the FBI, the Community Relations Service and the Office of Justice Programs, to determine how federal enforcement tools can be used to prosecute these crimes, and ways to assist state, Tribal, territorial and local law enforcement where threats of violence may not constitute federal crimes.

This training will help school board members and other potential victims understand the type of behavior that constitutes threats, how to report threatening conduct to the appropriate law enforcement agencies, and how to capture and preserve evidence of threatening conduct to aid in the investigation and prosecution of these crimes.

Threats of violence against school board members, officials, and workers in our nation’s public schools can be reported by the public to the FBI’s National Threat Operations Center (NTOC) via its national tip line (1-800-CALL-FBI) and online through the FBI website (http://fbi.gov/tips).

To ensure that threats are communicated to the appropriate authorities, NTOC will direct credible threats to FBI field offices, for coordination with the U.S. Attorney’s Office and law enforcement partners as appropriate. Reporting threats of violence through NTOC will help the federal government identify increased threats in specific jurisdictions as well as coordinated widespread efforts to intimidate educators and education workers.

Archbishop for Pelosi Asks Catholic Faithful to Pray, Fast for Her Soul Over Abortion