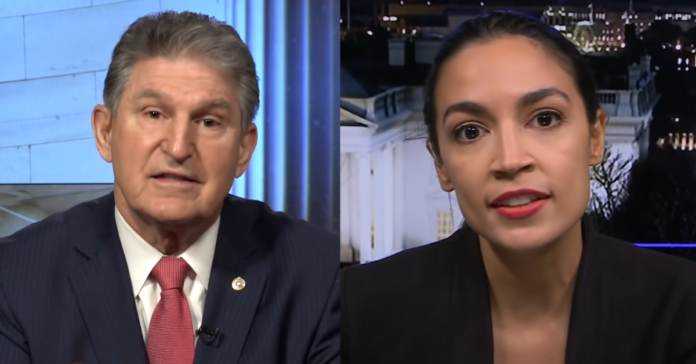 Senator Joe Manchin just overruled AOC and drew a red line over abortion funding in a new spending bill saying the bill would be “dead on arrival” in the Senate if language blocking abortion funding isn’t included.

“This is one of the first pro-choice Democratic majorities that we’ve elected, and so the majority of the House firmly believes in protecting a woman’s right to choose,” AOC said in favor of stripping the Hyde Amendment from the bill.

“We have made too much progress as a society, and the way that we think about human rights to allow the Hyde Amendment to remain in the reconciliation bill,” said Rep. Mondaire Jones (D-N.Y.).

“I think the main point is just that the principle of the Hyde Amendment has been that regardless of what program we’re talking about, we shouldn’t be funding abortion using taxpayer dollars,” Autumn Christensen, policy director of Susan B. Anthony’s List, a conservative anti-abortion group, said.

Sen. James Lankford (R-Okla.) said: “That should be the floor of any conversation about abortion is that we’re not going to pay for the taking of life of a child with federal dollars.”

He added he’ll “partner with Manchin to be able to do that.”

Rep. Pramila Jayapal (D-Wash.), said: “This happens a lot here in Congress where people are like, ‘Oh I want to show everybody that I’m anti-abortion, and I don’t want federal funds to go to abortions.’

“And I’m like, ‘Well, they don’t already, so don’t put it in the bill because you make those of us who actually want to repeal it vote for it again, and we don’t need too.”

But there’s confusion among other Democrats, including those who support the Hyde Amendment, as to whether the provision would need to be added to the reconciliation plan. And while a number of Democrats oppose the amendment, none have said publicly whether they would withhold support for the bill if it includes the provision, as the party tries to maintain a unified front amid spending negotiations.

Sen. Tim Kaine (D-Va.), who supports the Hyde Amendment, said he “doesn’t know that it needs to be included” in the bill, noting it’s typically included in Congress’ annual government appropriations bills, which are separate from the reconciliation legislation.

The amendment is traditionally included in the Department of Health and Human Services (HHS) spending bill passed by Congress every year. However, this year marked the first time in decades that the House Appropriations labor and health and human services subcommittee advanced the bill without the provision.

Though Kaine said he’d “probably” vote to back a provision preserving the amendment if it were brought to the floor when the Senate considers the reconciliation bill, he’s uncertain whether the amendment would be necessary.

Sen. Catherine Cortez Masto (D-Nev.) also told reporters she would “have to take a look” at the legislation, but she added shortly after that she “doesn’t normally support the Hyde Amendment.”

Christensen argued in an interview that the Hyde Amendment would need to be attached to the reconciliation bill to prohibit federal dollars from going to abortion if Democrats move forward with their plans to create the new Medicaid-like program.

“Typically, funds that are made available through reconciliation don’t go through the Labor HHS bill,” Christensen said.

“And so, this program, while it’s being called a Medicaid look alike, it’s not actually a change to Medicaid as much as it’s a new program to cover that potential Medicaid population,” she said. “And because the funds are directly appropriated in the reconciliation bill, the Hyde language does not attach to them.”

Leaked Proposals Show US and Chinese Scientists Planned To Create A New Coronavirus In 2018...Well Before Start of COVID-19 Pandemic