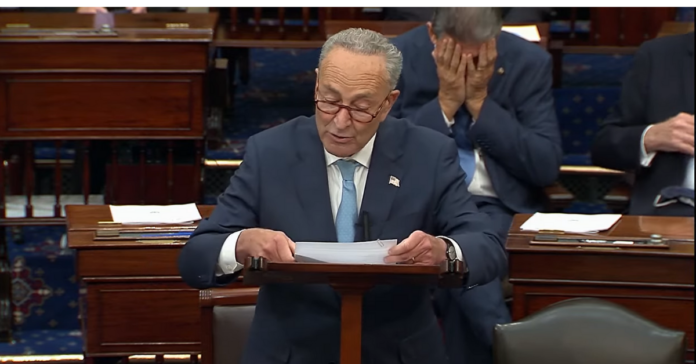 Sen. Joe Manchin (D-W.Va.) didn’t like Chuck Schumer’s gloating over a deal on the debt ceiling last night and blasted the hapless New York Senator saying Chuck’s speech on the floor of the Senate was ‘f*cking stupid.’

Senate Minority Whip John Thune and others in the GOP were furious as well as Schumer’s showboating. Thune called out Schumer to his face on the Senate floor while Sens. Mike Rounds (R-S.D.) and Mitt Romney (R-Utah) ripped the speech to the media.

Chuck delayed the vote for a few months with his deal but by ripping the GOP after they threw him a bone he only cemented the opposition the Dems will face in a few months. This is why Manchin trashed Schumer. Because now the Dems really are screwed and they will not get any help from the GOP.

“Leader McConnell and Senate Republicans insisted they wanted a solution to the debt ceiling, but the Democrats must raise it alone by going through a drawn-out, convoluted, risky reconciliation process.

“That was simply unacceptable to my caucus.

“And yesterday, Senate Republicans finally realized their obstruction was not going to work.

“I thank, very much thank, my Democratic colleagues, for showing our unity in solving this Republican-manufactured crisis.

“Despite immense opposition from Leader McConnell and members of his conference, our caucus held together and we pulled our country back from the cliff’s edge that Republicans tried to push us over.

“This is a temporary but necessary and important fix.

“I appreciate that at the end of the day we were able to raise the debt limit without a convoluted and unnecessary reconciliation process that until today the Republican leader claimed was the only way to address the debt ceiling.”

The only possible motive behind Schumer’s blunder last night is he wants to blow up the filibuster but Manchin shot that down last night too:

“The filibuster is the only thread we have in America to keep democracy alive and well,” Manchin said.

Chuck Schumer roasted Republicans after passage of a debt limit fix. But he ended up killing the mood for Joe Manchin.https://t.co/qypDxh57Lb

Sen. Schumer blasted Republicans after the debt-ceiling reprieve. He was criticized for it — by Sen. Manchin. https://t.co/VnkLfgIkxn