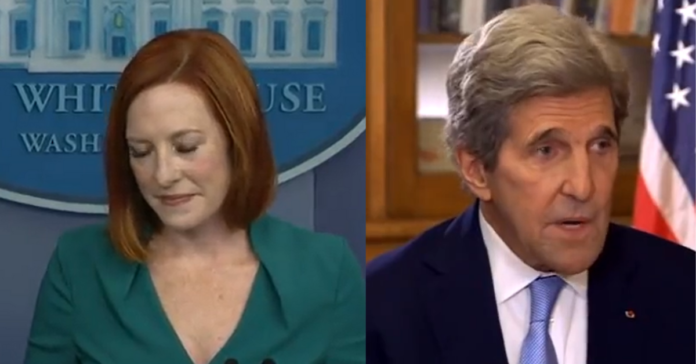 “Of course he knew about the French being displeased,” Psaki said. “I would encourage you to ask John Kerry specifically about the context of his comments.”

“The president and the former secretary are also good friends. He relies on his council as he does with many members of his national security team.”

In an interview with French television, John Kerry said Biden had no idea what was going on with the deal.

Kerry said in the interview: “He asked me. He said, ‘what’s the situation?’ and I explained exactly, uh he was he had not been aware of that, he literally, literally had not been aware of what had transpired. And I don’t want to go into the details of it, but suffice it to say, that that the president. My president is very committed to, um, strengthening the relationship and making sure that this is a small event of the past and moving on to the much more important future.”

To tell you how bad of a blunder this was, France recalled their ambassadors for the first time in history.

According to the New York Times:

It was the first time in the history of the long alliance between France and the United States, dating back to 1778, that a French ambassador has been recalled to Paris in this way for consultations.

The decision by President Emmanuel Macron reflects the extent of French outrage at what it has a called a “brutal” American decision and a “stab in the back” from Australia.

In a statement, Jean-Yves Le Drian, the French foreign minister, said the decision was made by Mr. Macron, who is understood to be furious about the way the United States, Britain and Australia negotiated the deal without informing France.

Australia on Wednesday canceled a $66 billion agreement to purchase French-built, conventionally powered submarines, hours before the deal with Washington and London was announced.

The blunder last month followed the Biden administration’s failure to inform many allies ahead of time that it had planned to pull the military out of Afghanistan by the end of August — an exit that culminated in a chaotic operation to evacuate US citizens and Afghans as the Taliban took over the government.

Eventually Biden had to pick up the phone to call French President Emmanuel Macron to ​heal the rift.

“The two leaders agreed that the situation would have benefited from open consultations among allies on matters of strategic interest to France and our European partners. President Biden conveyed his ongoing commitment in that regard,” the White House conceded in a statement about the Sept. 22 call.

Blinken met with Macron on Tuesday to assure him the relationship between the two longtime allies remains strong.

.@PressSec disputes John Kerry’s comments that “the President literally had not been aware of what had transpired” regarding tension between France & the U.S.

DOOCY: “…this President’s first love is foreign policy, so why doesn’t he know about these things in real time?” pic.twitter.com/PDpU2q7bfG

John Kerry admits in interview with French TV that Joe Biden had no idea about the fallout with the French from the AUKUS sub deal.

“He literally had not been aware of what had transpired” pic.twitter.com/EblvE05zKg

Video Shows TX High School Shooter In Classroom Fight Before Shooting 3 Students and Teacher...Family Says Teen Was "Relentlessly bullied" and "Was trying to protect himself"