Let’s face it, it’s getting harder and harder to believe this ridiculous “81 million” number, isn’t it?

I mean, I never bought it in the first place, but it’s to the point of absurdity now, right?

Honestly, where are Joe Biden’s supporters?

This is a photo from an Obama rally…and we’re told that Joe Biden got more votes than him. 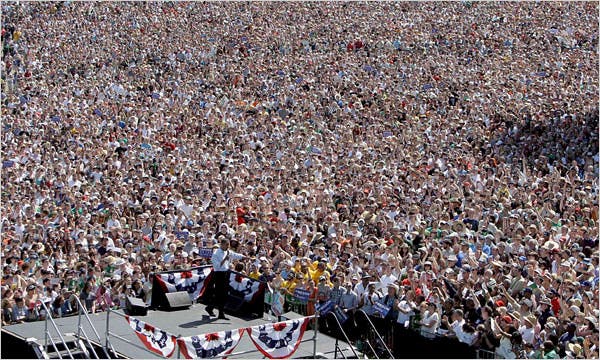 I guess we’re all witnessing the most popular political movement in the history of the country, with literally nobody to show for it.

And speaking of nobody showing up – on Tuesday, Joe Biden was in my home state of Michigan, in a city called Howell, which is on the east side of the state.

He rolled into town and was welcomed by a roadside Trump parade of about 1,500 people, waving “F Joe Biden” flags and “Trump 2024” flags…and it only got worse from that point on.

When Joe finally got settled and addressed his “crowd” (a term I am using very loosely), the response from the few people standing there waiting to listen to him, was mindboggling…So much so, it basically had everyone saying “okay, that’s it, there is NOT 81 million who voted for this guy…”

Michigan is clearly thrilled to have Joe Biden in their state… pic.twitter.com/Z1asCaKHzy

Here are some of the comments from folks online:

“And this guy received the most votes in American election history?”

“Most voted for president in the history of this country. Sure.”

“I thought Michigan had more than 8 citizens?”

“after this do they seriously still expect us to believe that this clown is the most beloved president in u.s. history?”

“Their enthusiasm is contagious. LOL.”

“I’m sorry, but where are his supporters?”

I don’t know about you, but that doesn’t sound like the kind of welcome a guy who won 81 million legal votes gets.

It’s things like this, that add up over and over and over again, that slowly but surely eat away at Joe Biden’s credibility and this laughable number they throw out there.

We’re just supposed to take their word for it – that Joe is the most popular and beloved politician of all time because you can’t see it anywhere else. Nobody comes out for this guy – they don’t line the streets for him, they don’t show up at his little rallies or events, they don’t watch his stuff online, or his CNN specials.

Well, at least we know about 8 of his voters were in Michigan on Tuesday.