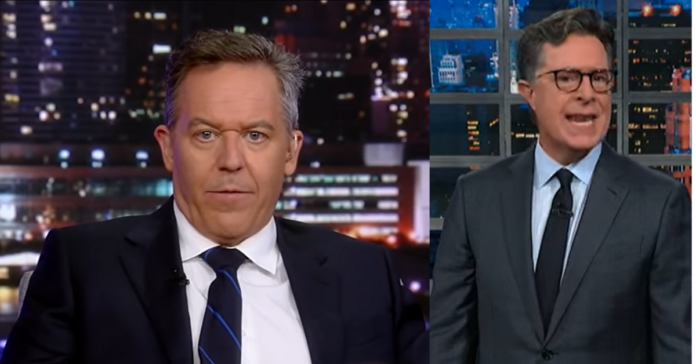 Conservative comedian Greg Gutfeld’s late night Fox News comedy show Gutfeld! continues to dominate in the ratings. Gutfeld beat every other late night show in viewership, including Stephen Colbert’s Late Show on CBS, marking a stunning rise to the top of the charts for a new show in that category.

Bill Maher said of Gutfeld’s dominance a few weeks ago: “I’ve been asked over the years many times, ‘Why isn’t there a conservative comedy?’ And I would always give the answer, which I think was the true answer, ‘There’s not good fodder for it.

“You know, a lot of this stuff that’s going on the left now, it’s, you know, ‘Seattle votes to decriminalize crime.’ Now, the problem is that they don’t know how to do comedy, but if they found someone who did, they could, because comedy goes where the funny is. And there is funny on the left now as well as the right.

“You know, the liberals aren’t crazy. This was my answer for many years. Now, I don’t think it’s the same situation.

“You know, ‘Three-year-olds pick their own gender’ is an Onion headline,” he said.

It beat out Late Show in the 11.35pm time slot for the second time on record with total viewership of 1.896million on Tuesday with 423,000 in the key demographic.

Here’s our favorite sack of spoiled potatoes – Joy Behar – explaining that activists had to go into the bathroom to confront Senator Sinema.

Joy Behar, Tuesday: Sinema is MIA all over the place! She’s not around. They call her to have a meeting; they trying to get her on the phone. She doesn’t… She’s like a missing person. So, this is the only alternative they have.

Easy for her to say. No one’s brave enough to follow Joy Behar into the can. Talk about a death wish: six feet of distance versus that blast radius? It’s the only time I’d agree with Fauci about wearing multiple masks.

So Sinema being MIA makes it okay for her to be bullied in a bathroom. By Joy’s logic, right-wing activists should be in a line 15 deep in front of a stall when Kamala is “dropping the kids off at the pool”.

Talk about someone being MIA! She’s the first VP in history who can only be found with an Amber Alert.

But my favorite hypocrite: the shape-shifter Kirsten Powers, who used to spend many a lonely night lecturing us on how mean we are to women in politics, and that a lack of grace was destroying the very fabric of America. But now that she’s on CNN, her opinion changes.

It’s amazing what 300 bucks a week and free hair and makeup will do. She claims that she was flabbergasted that people were upset over bullies chasing Sinema into the stall.