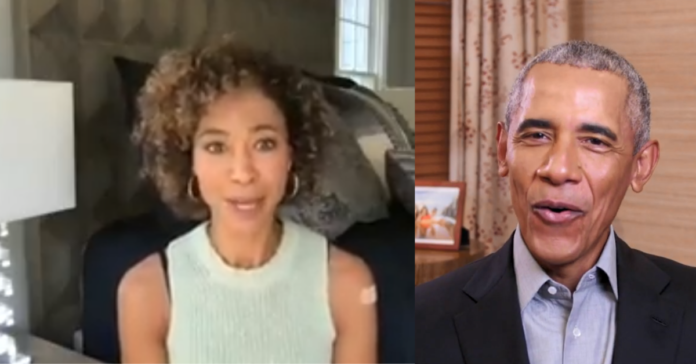 ESPN has suspended reporter Sage Steele for a week after she made controversial remarks in an appearance of former NFL player Jay Cutler’s podcast. She criticized other female reporters and took some swipes at Barack Obama.

“At ESPN, we embrace different points of view — dialogue and discussion makes this place great,”  ESPN said in a statement. “That said, we expect that those points of view be expressed respectfully, in a manner consistent with our values, and in line with our internal policies.”

“I know my recent comments created controversy for the company, and I apologize,” Steele said. “We are in the midst of an extremely challenging time that impacts all of us, and it’s more critical than ever that we communicate constructively and thoughtfully.”

She said of Barack Obama: “I’m like, ‘Well, congratulations to the president. That’s his thing.’

“I think that’s fascinating considering his Black dad was nowhere to be found, but his White mom and grandma raised him, but hey, you do you.

On some women sportscasters:

“So when you dress like that, I’m not saying you deserve the gross comments, but you know what you’re doing when you’re putting that outfit on, too.

“Like, women are smart, so don’t play coy and put it all on the guys.”

“When a year ago I felt it was necessary to resume my political commentary, I resigned from ESPN with a lot of time on my deal and a new one under discussion, to save them any anxiety.

“I’ve seen others there threatened over opaque, accidental political references.

“Sadly, Sage Steele has a long rep there for trying to blow up the careers of co-anchors and other co-workers.

“Mind of an assassin, no aim, always wounding herself. But this stuff, especially the Obama part, is intolerable. They need to take her off the air, immediately.”

Sage Steele thinks it’s “fascinating” that President Obama could say he was Black on his census form “considering his Black dad was nowhere to be found.”