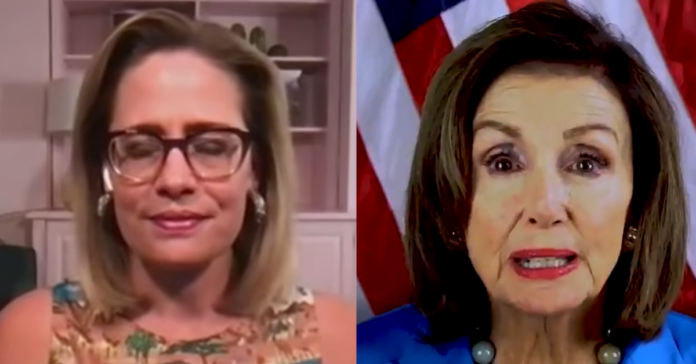 Speaker Nancy Pelosi (D-Calif.) caved on Saturday and set a new deadline of Oct. 31 for the House to pass the $1.2 trillion bipartisan infrastructure bill enraging other Dems in the process.

In a “Dear Colleague” letter released on Saturday, Pelosi said that “more time was needed” to pass the infrastructure bill and the other higher priced bill that two key Dem Senators will not support.

Pelosi wrote: “There is an October 31st Surface Transportation Authorization deadline, after last night’s passage of a critical 30-day extension. We must pass BIF [infrastructure bill] well before then – the sooner the better, to get the jobs out there.

“Out of respect for our colleagues who support the bills and out of recognition for the need for both, I would not bring BIF to the floor to fail.

“Again, we will and must pass both bills soon. We have the responsibility and the opportunity to do so.  People are waiting and want results,” the speaker wrote.

Sen. Kyrsten Sinema (D-Ariz.) is not happy calling the move to delay the vote “inexcusable.”

She said: “Over the course of this year, Democratic leaders have made conflicting promises that could not all be kept — and have, at times, pretended that differences of opinion within our party did not exist, even when those disagreements were repeatedly made clear directly and publicly.”

“More importantly, it betrays the trust the American people have placed in their elected leaders and denies our country crucial investments to expand economic opportunities.

“Arizonans, and all everyday Americans, expect their lawmakers to consider legislation on the merits — rather than obstruct new jobs and critical infrastructure investments for no substantive reason. What Americans have seen instead is an ineffective stunt to gain leverage over a separate proposal.

“My vote belongs to Arizona, and I do not trade my vote for political favors.

“I vote based only on what is best for my state and the country. I have never, and would never, agree to any bargain that would hold one piece of legislation hostage to another.,” she said.

.@SenatorSinema unloads after the House delays a vote on her infrastructure bill:

“inexcusable, and deeply disappointing for communities across our country.”

“ineffective stunt to gain leverage over a separate proposal”

“betrays the trust the American people have placed” pic.twitter.com/Vu4jNy8qy4

Nancy Pelosi provided House Democrats with a new Oct. 31 target date to pass the stalled bipartisan infrastructure bill, saying she backed off a pledge to bring the measure to a vote this week because it would have been defeated https://t.co/hWTTpTmnLG