Trump Puts George W Bush In His Place: “He goes down as one of the worst presidents in history” 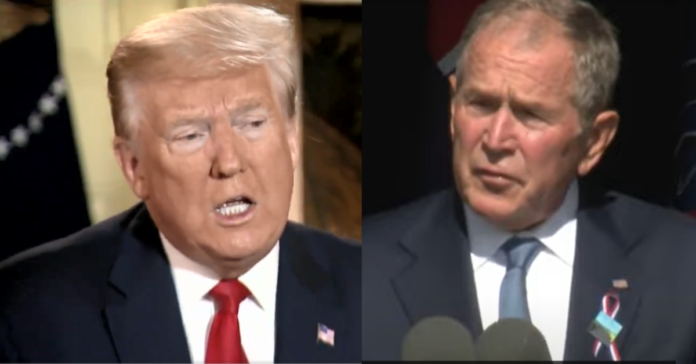 Former President Donald Trump put former President George W. Bush in his place after Bush took some veiled swipes at Trump and his supporters during a 9/11 memorial. Trump was not pleased and in a wide-ranging interview fired back at Bush.

“Afghanistan is one of the worst things I think I’ve ever seen for our country. To lose the young people [killed in the bomb blast] is so horrible. It’s a horrible situation. What Biden is doing is grossly incompetent. It’s a disgrace.

“Bush now goes around lecturing everybody about all sorts of things, and he shouldn’t be lecturing anybody, because he’s the one who got us into the mess of the Middle East.

“In the 20 years since, it’s been obliterated, and it’s probably in worse shape now than it’s ever been because of him.

“When Bush left the presidency, his approval rating was in the low-20s. I don’t know how he was that high. There must’ve been something wrong with the poll.

“I think Mitch McConnell has proven to be a disaster.

“He’s not good for the Republican Party as a leader, and I wish I wouldn’t have endorsed him.

“The Senate has to make a change at some point. I don’t think it’s acceptable having him as a leader.

“The Democrats have become radicalized, and the Republicans don’t have good leadership because they don’t fight as hard.

“Democrats have horrible policy, they’re vicious, but they stay together.

“There’s a discontent with everything having to do with politics.

“People are so disgusted with the way people are being treated from the Jan. 6 situation. It’s a combination of that compared to how Antifa and BLM were treated. When you compare the treatment, it is so unjust, it is so unfair. It’s disgraceful.

“Well, you’d always do things differently. I would’ve used different people in some cases. There are some people I would not have used who I didn’t think were very good, and that’s because I wasn’t a Washington person. I know everybody now.

“Milley’s a television general, and he’s not very good at it.

“He’s been a disaster for the current administration. He got weak-kneed.

“We have great generals.

“We took out ISIS, Soleimani, al-Baghdadi, and we did a lot of great work.

“We don’t have a free press anymore. We have nothing close to a free press. We have a very corrupted press,” he said.

“Bush was a disaster getting us into the Middle East. He’s the one that got us into the quicksand of the Middle East, and he didn’t win. He didn’t know how to win. I think he goes down as one of the worst presidents in history” – President Donald Trump https://t.co/eJe0BxsYP7

FOLLOW ON TELEGRAM
Article Source : TheConservativeOpinion.com
OPINION: This article contains commentary which reflects the author’s opinion
Reminder : The purpose of the articles that you will find on this website is to EDUCATE our opinions and not to disinform or grow hate and anger!

Pelosi Launches Disgusting Attack Against Trump Supporters, Refers to Them as a 'Cult'