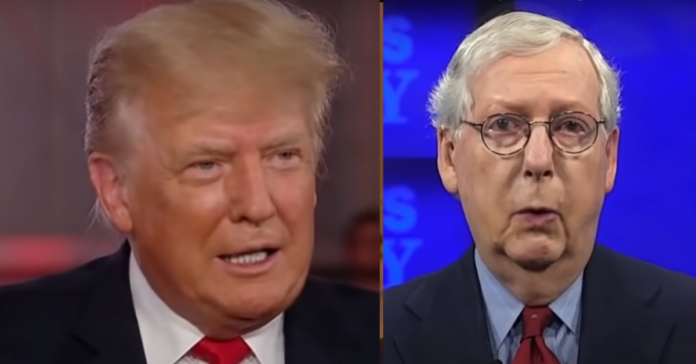 Former President Trump is making a move to remove Senate Minority Leader Mitch McConnell (R-Ky.) from his leadership position in the Senate and the Republican Party according to multiple media outlets.

The move is not a surprise to anyone save Mitch McConnell who thought he would gain, not lose power, with Trump out of the White House. Trump has famously feuded with Mitch but the two always came together at election time to rally the GOP but that may be a thing of the past.

Mitch said after Jan 6, “There’s no question, none, that President Trump is practically and morally responsible for provoking the events of the day. No question about it. The people that stormed this building believed they were acting on the wishes and instructions of their president.

While many blame this quote for the split, in reality, the two were clashing for years and this battle for control of the GOP was coming.

“I think we’re going to do very well. We need good leadership. Mitch McConnell has not done a great job. I think they should change Mitch McConnell.”

“Nobody will ever understand why Mitch McConnell allowed this non-infrastructure bill to be passed. He has given up all of his leverage for the big whopper of a bill that will follow.”

“I have quietly said for years that Mitch McConnell is the most overrated man in politics — now I don’t have to be quiet anymore.”

Trump would need the majority of the GOP in the Senate go along with the plan and while many say they are not on board don’t count Trump out. He will continue to push for Mitch’s ouster until he gets if it takes him three years. If you look at the last five years, the smart money is on Tump winning this battle.

Mr. Trump has spoken recently with senators and allies about trying to depose Mr. McConnell and whether any Republicans are interested in mounting a challenge, according to people familiar with the conversations.

There is little appetite among Senate Republicans for such a plan, lawmakers and aides said, but the discussions risk driving a wedge deeper between the most influential figure in the Republican Party and its highest-ranking member in elected office.

If Trump does run, he’s getting a head start on fundraising against Biden

BREAKING: Biden to deport nearly 13,000 Haitians from bridge in Texas and it’s all thanks to President Trump