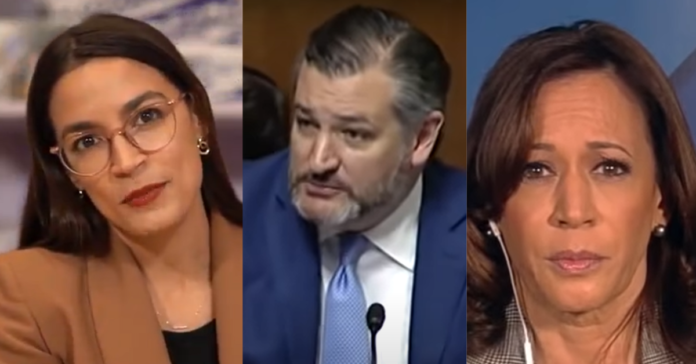 Senator Ted Cruz issued a challenge to Alexandria Ocasio-Cortez, Kamala Harris, Jen Psaki and others in the Biden administration over the conditions at the border.

“I challenge every one of them: I challenge Biden, I challenge Harris, I challenge AOC, who famously had a picture of her pretending to cry in front of a cage with children,” Cruz started. “Come down to the Biden cages now, which are bigger and more full,” Ted said.

Cruz continued: “They are lying and they’re counting on the media to cover up their lies, and it’s incredibly cynical and it’s wrong.

“I’m proud to know quite a few heroes in our Border Patrol, and, even before Biden’s slander, they were demoralized and dispirited because under the Biden-Harris administration.

“They risk their lives to apprehend drug traffickers and human traffickers only to see their political superiors release them through the revolving door of Biden’s open borders.

“Now, not only are they having their work undermined, but Biden is threatening political retribution because the open-border radicals in the Democratic Party believe that the Border Patrol are what Nancy Pelosi calls them: stormtroopers, analogizing them to Nazi soldiers.

“That is grotesquely unfair.

“It is wrong, destructive.

“I am amazed that every Border Patrol agent in America doesn’t say ‘to hell with it’ and refuse to come back to work,” he said.

Joe Biden and Kamala Harris refuse to enforce the law.

They’ve essentially said to anyone who wants to come to America they’re going to resettle them, give them benefits, and let them stay.

The result? A public health and humanitarian crisis. #BidenBorderCrisis pic.twitter.com/ZBaPJWNMAC