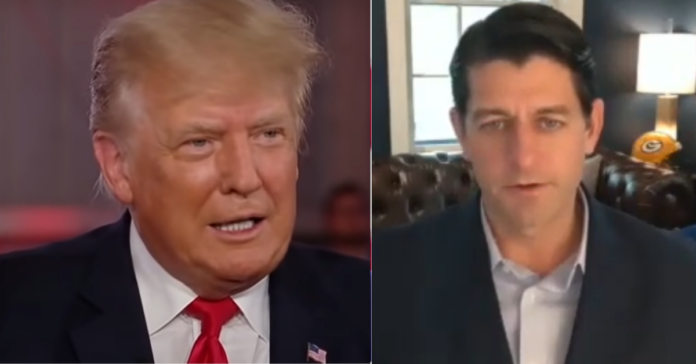 Former Speaker Paul Ryan (R-Wis.) has a lot of explaining to do after a new leak from the upcoming book by Bob Woodward shows Ryan seeming to sabotage his relationship with Trump before it even started.

Ryan and Trump clashed on a host of different issues but mainly it was policy. Ryan wanted to keep up the failed policies of the past while Trump wanted to drain the swamp.

According to Woodward’s new book, Ryan thought so little of Trump that after Trump’s historic win against Hillary Clinton, Ryan started researching how to interact with people with a narcissistic personality disorder.

The book ads that Ryan, after realizing that he had to work with Trump as the GOP held the House, Senate and presidency, researched how to work with someone “amoral and transactional.”

Woodward claims that “Ryan studied them for weeks, convinced Trump had the personality disorder.”

Trump and Ryan butted heads after Trump publicly defended the neo-Nazis who started a violent riot in Charlottesville, Va. in 2017.

“White supremacy is repulsive,” Ryan tweeted at the time, calling out the rioters. “This bigotry is counter to all this country stands for. There can be no moral ambiguity.”

Woodward and Costa write that Trump later called Ryan, enraged over the statement. Trump reportedly yelled, “You’re not in the foxhole with me!”

“Are you finished?” Ryan shouted back, according to their book. “May I have some time to speak now? You’re the president of the United States. You have a moral leadership obligation to get this right and not declare there is a moral equivalency here.”

However, Trump dug his heels in and replied, “These people love me. These are my people. I can’t backstab the people who support me.”

Trump reportedly gave in after Ryan brought his attention to the neo-Nazis in the crowd.

“Well, yeah, there’s some bad people,” Trump said, according to the book. “I get that. I’m not for that. I’m against all that. But there’s some of those people who are for me. Some of them are good people.”

The two men also found themselves at odds in early 2018 after Congress sent a $1.3 trillion omnibus package to Trump for his signature. The president wanted to veto the bill and, according to the book, shouted at Ryan during a White House meeting that “this is a terrible deal!”

“Who signed off on this piece of shit?” Trump asked, the book said. “This is a piece of shit, a bad fucking deal.”

Ryan eventually got Trump to sign the bill by dispatching then Defense Secretary James Mattis to the Oval Office, saying, “If you’re standing there, he’ll do it.”

Ryan has joined the swamp full-time now. He has a seat on Fox News’ board, his own foundation, and according to the Wall Street Journal, he is working with Mitt Romney’s son.

Former House speaker Paul Ryan, who last year joined the rush of high-profile individuals launching special-purpose acquisition companies, is going to work at the private-equity firm he teamed up with in that effort.

Mr. Ryan will join Solamere Capital, a private-equity firm founded by Utah Sen. Mitt Romney’s son Taggart, as well as Eric Scheuermann and Spencer Zwick, as a partner. Solamere, a Boston firm with more than $1 billion in assets, seeks to invest in high-growth companies and help them expand and create jobs, he said.