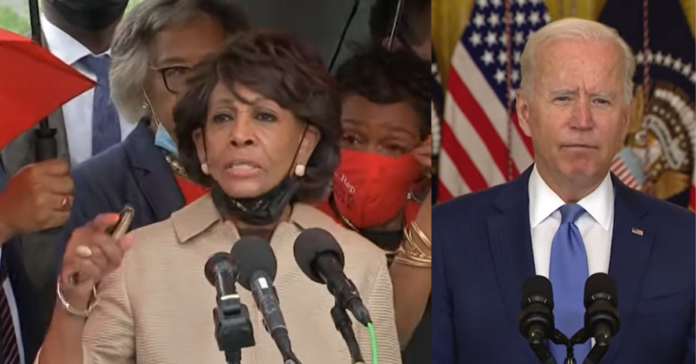 She continued: “He is the one that does not follow the constitution and would not allow those seeking refuge to petition to get into the country. What the hell are we doing here?

“What we witnessed takes us back hundreds of years.

“What they do is a training technique that has been shown to them to make sure that no one takes over their horse.

“Today, I had the honor of taking eight members of the Congressional Black Caucus and leadership directly to the White House.

“And part of that was to speak to those deplorable photos and ask why that all those recognized riding horses using their reins to chase down Haitians like they were cattle and goats to be suspended, terminated.

“We cannot and we must not look away in this moment. Instead of leading with compassion and grace, these families have been met with cruelty.

“Haitian lives are black lives, and if we truly believe that black lives matter, then we must reverse course,” Pressley said before calling on Biden to “immediately and indefinitely halt all deportations of Haitian migrants.”

“Congress must do the work of investigating and ensuring accountability of the egregious and white supremacist behavior of Border Patrol agents in Del Rio Texas,” Pressley added.

WATCH: Tom Cotton says the world is laughing at Biden