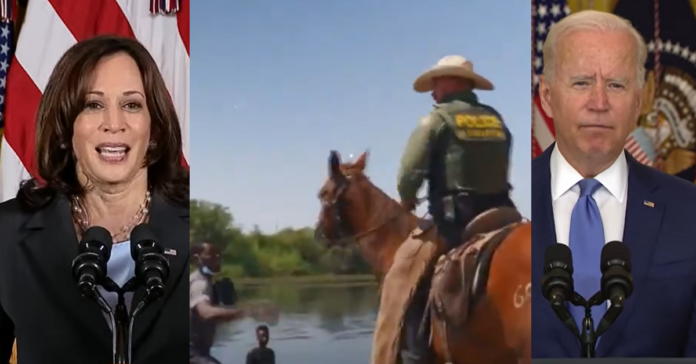 Vice President Kamala Harris finally surfaced and responded to the chaos at the border but what she said caught many by surprise. Harris said she was “deeply troubled” by photos showing Border Patrol agents on horseback blocking migrants from entering the U.S. after crossing the river and called for an investigation into Joe Biden’s DHS.

“What I saw depicted about those individuals on horseback treating human beings the way they were, was horrible,” Harris said. She continued: “And I fully support what is happening right now, which is a thorough investigation into exactly what is going on there.

“But human beings should never be treated that way.

“And I’m deeply troubled about it. And I’ll also be talking to Secretary Mayorkas about it today.”

“I was horrified by what I saw,” Mayorkas said on CNN.

“I’m going to let the investigation run its course. But the pictures that I observed troubled me profoundly. That defies all of the values that we seek to instill in our people.”

Press Secretary Jen Psaki said: “I don’t think anyone seeing that footage would think it was acceptable or appropriate.”

Border Patrol agents were stunned at the Dem’s response to the photos. From Fox News:

As DHS has surged resources, including more agents on horseback, supplies and medical assistance, while also increasing deportation flights, the men and women in green have been attempting to stop migrants – who have traveled through multiple countries before arriving at the border – from coming into U.S. territory.

Border Patrol agents who spoke to Fox News were angered by the pile-on from the administration, and accused it of trying to deflect from its inability to control the border.

“This whole situation is blowing up and even liberals are turning on this administration,” one agent told Fox News. “[Harris] is placing blame on agents to deflect because she and Biden are not going to change how they are handling this.”

Another source was more blunt, saying that the outrage “just proves what absolute idiots they are.”

With basic knowledge and two brain cells, anyone knows those agents use split reins. They do use them as a whip, on their horses,” the agent said. “This helps get a quicker response from the horse to move out when needed, especially when the horse may be hesitant with groups of people or other animals.”

“Again it is clear that those ‘in charge,’ a term that is disgusting to use, have no clue about our operations and frankly operate by ignorance and unhinged emotions,” the agent said.

Some Democrats and media outlets falsely described the agents’ long reins, which they use to control their horses, as “whips.” House Speaker Nancy Pelosi condemned what she described as “the inappropriate use of what appear to be whips by Border Patrol officers on horseback to intimidate migrants.”

As a Member who’s led trips to our border, the reports of Border Patrol officers seemingly using horses & whips or reins to round up Haitian migrants are repulsive. We have a legal & moral obligation to migrants. These barbarous acts must be investigated & those involved fired!