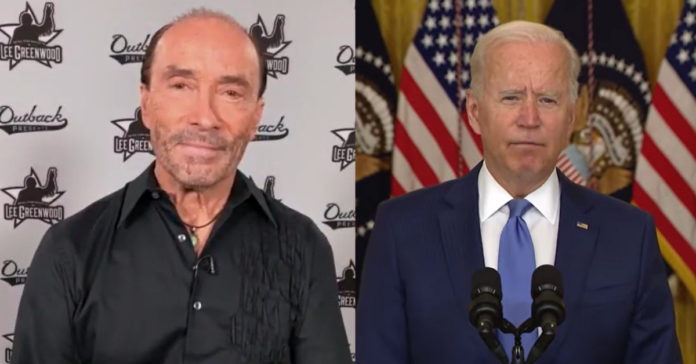 Country Music legend Lee Greenwood told Fox News that he was “shocked” when he got an email from the Biden administration saying he was being replaced on National Council on the Arts.

Lee said: “You know, it’s a six-year appointment and I was appointed by George W. Bush 43. So I served under his term. Also, President Obama’s term. Of course, President Trump’s term. And then as you know he used my song “God Bless the USA,” which is unilateral for me.

“It’s meant for all people, not just for a particular political party. So hearing now under the Biden administration and he’s cleaned house and finally he’s fired a patriot.

“I was quite shocked to tell you the truth.  I didn’t get a phone call or letter.  It was just an email.

“I would like to think that it is. And I have to tell you in all our shows. I don’t care where they are.

“We always honor our veterans and want to particularly point out the fact we have this amazing show coming up October 12th in Huntsville, Alabama at the Bronze Center and set aside a lock of tickets which I do at most of our events.

“This is a very special television production and more importantly we want to make sure that veterans and their caregivers can come to our performance.

“It’s going to be star-studded with 40 different singers singing the 40 years of hits that we have had.

“So, if your listeners will go to our website LeeGreenwood.com and adopt a vet.

“For $100 you can put a vet and caregiver in a seat to watch this amazing television production,” he said.

You’d have to be a hermit to not be familiar with Lee Greenwood’s hit, “God Bless The USA.” He wrote the song in 1983 to unite Americans and instill pride in the country.  Ronald Reagan loved the song and played it at the 1984 Republican National Convention. It surged to the top of the charts in the aftermath of 9/11.

Greenwood was appointed to the National Council on the Arts by President George W. Bush. He was reappointed by Barack Obama and by Donald Trump.

But Greenwood was notified yesterday that the Biden Administration will not reappoint him to the Arts Council.

Now Biden wants him cancelled, too.

So much for uniting the country!https://t.co/OucHBwgj06

You can’t make this up. Lee Greenwood ‘shocked’ for being replaced on arts council by Biden administration | Fox News https://t.co/mSTJpY39UV

PHOTOS Emerge of Haitians Being Released...Reports of 6K Released Into America

Democrat TX Judge Sounds Off Over Border Crisis: ‘Biden Fomented This And Now He’s Alienated Us’