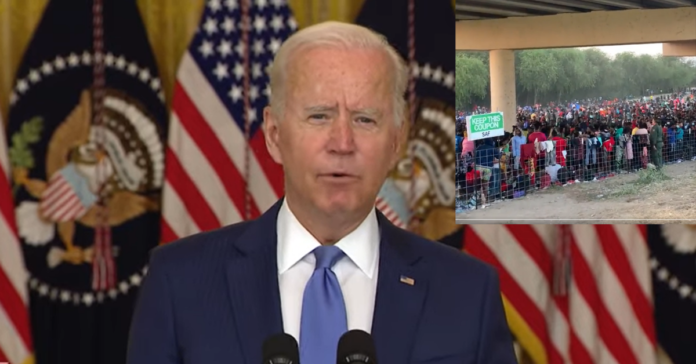 President Joe Biden finally came clean to the American people and admitted that the U.S. border with Mexico is not under control. Biden should get no points for finally telling us the truth as he had no choice because the pictures coming from the crisis cannot be spun.

The stunning admission came when Biden was walking past the media and finally answered a reporters’ question: “Mr. President, what is your reaction to the images coming from the southern border? ”

Maxine Water does not agree with Joe Biden calling his administration’s treatment of Haitian migrants in Texas worse than slavery before accusing Biden of following Trump’s ‘unconstitutional border policy.

She continued: “He is the one that does not follow the constitution and would not allow those seeking refuge to petition to get into the country. What the hell are we doing here?

“What we witnessed takes us back hundreds of years.

Under Mayorkas’s pro-migration policies, the number of migrants has exploded — and threatens to keep rising because Mayorkas is letting about half of the migrants into the United States to take jobs and rentals and to seek U.S. green cards.

In July, for example, 213,500 migrants appeared at the border, not counting people who sneaked across the border.

Roughly half of the 213,500 migrants — 117,000 — were released into the United States, despite the scant evidence that they meet the criteria to win asylum claims and despite federal law which requires they be detained until a judge decides their asylum claim.

One month later, despite rising summer temperatures, 209,000 more migrants appeared at the border, and Mayorkas released 115,500 of them into the U.S. labor market, according to federal data.

WATCH: Joe Biden finally admits the border is not “under control” despite claiming it was in April. pic.twitter.com/xnkoX51bSM

The CBS “Survivor” Premier Was a Confusing, Woke, Awkward and Disheveled Mess