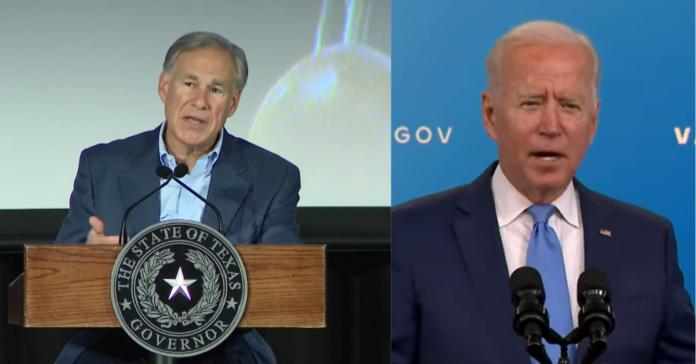 Texas Gov. Greg Abbott overruled President Joe Biden and his hapless sidekick border czar Kamala Harris saying due to the ‘negligence of the Biden administration’ he had  no choice but to close 6 border crossing with Mexico to stop ‘caravans from overrunning our state.’

He ordered the Texas Department of Public Safety and the Texas National Guard to shut down six points of entry along the US-Mexico because Biden failed to secure the border.

Abbott said: “The sheer negligence of the Biden Administration to do their job and secure the border is appalling. I have directed the Department of Public Safety and the Texas National Guard to surge personnel and vehicles to shut down six points of entry along the southern border to stop these caravans from overrunning our state.

“The border crisis is so dire that the U.S. Customs and Border Protection is requesting our help as their agents are overwhelmed by the chaos,” Abbott said. “Unlike President Biden, the State of Texas remains committed to securing our border and protecting Americans.”

“Six, seven days ago, Del Rio saw 400 migrants sitting, underneath the bridge, the (point of entry) in downtown Del Rio there’s about 6,000 sitting there right now and more are coming.

“Before I came here today, my last instructions are, we’re going to shut down all the POEs in Del Rio,” he said.

According to the US Customs and Border Protection website, the “Del Rio Sector is responsible for detecting and preventing the smuggling and unlawful entry of undocumented immigrants into the United States along 245 miles of the Rio Grande River and Lake Amistad that forms the border between the U.S. and Mexico. The area covers 55,063 square miles of Texas, and reaches 300 miles into Texas from the U.S.-Mexico border.”

Images that show thousands of people who illegally crossed the border and are in Border Patrol custody under a bridge in Del Rio, Texas, were published this week on Twitter by Fox News reporter Bill Melugin.

Border Patrol does not have facility space to detain and process the thousands being encountered, and an unknown number of people are evading detection when crossing and getting away.

In some late-breaking news, Abbott may be reconsidering his move.

From The Texas Tribune:

A few hours later, Abbott sent out a new statement saying that the Biden administration “has now flip-flopped to a different strategy that abandons border security and instead makes it easier for people to cross illegally and for cartels to exploit the border … I have directed the Texas Department of Public Safety and the Texas National Guard to maintain their presence at and around ports of entry to deter crossings.”

Dennis Smith, the CBP spokesperson, said after Abbott’s initial directive that the agency had received no word from the federal government to shut down ports of entry.

“I couldn’t comment on anything the governor said, I don’t have any information on that,” Smith said.

Abbott’s statements don’t specify who at CBP made the request for assistance or what form of assistance was requested.

Abbott’s announcement comes as thousands of asylum-seeking migrants — most of them from Haiti — are waiting under an international bridge in Del Rio to be processed to enter the country, according to Val Verde County Sheriff Joe Frank Martinez.
FOLLOW ON TELEGRAM

Report: Biden Ignored Warning from Commander of US-Afghan Forces to Not Withdraw Troops