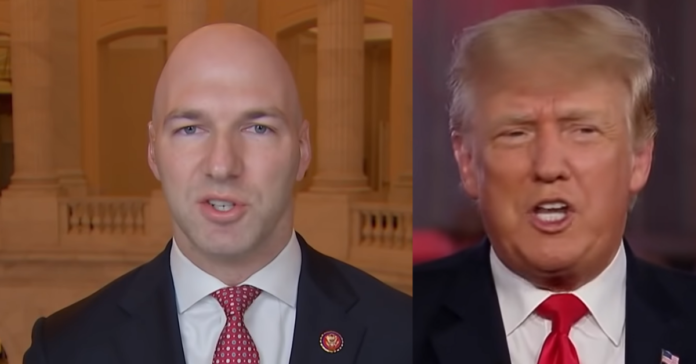 Rep. Anthony Gonzalez, one of 10 Republicans who voted to impeach former President Donald Trump and who Trump has targeted by backing his primary challenger, just threw in the towel and said he will not seek re-election to his northern Ohio seat in 2022.

Gonzalez tried to say he was caving for family reasons before giving up the game attacking Trump calling him a ‘cancer for the country.’ “Since entering politics, I have always said that I will do this job for as long as the voters will have me and it still works for my family,” Gonzalez said.

“As Elizabeth and I consider the realities of continuing in public service while juggling the increasing responsibilities of being parents to our two beautiful children, it is clear that the best path for our family is to not seek re-election next fall.”

“While my desire to build a fuller family life is at the heart of my decision, it is also true that the current state of our politics, especially many of the toxic dynamics inside our own party, is a significant factor in my decision,” he said.

“Please know that every word has meant the world to me and given me hope that the chaotic political environment that currently infects our country will only be temporary,” Gonzalez said in announcing his retirement.

“You can fight your butt off and win this thing,” he told a local newspaper, “but are you really going to be happy? And the answer is, probably not.”

At an Ohio rally earlier this year that Trump held just to promote his hand picked primary challenger, Trump slammed Gonzalez calling him  “a grandstanding RINO,” who voted  in favor of “the unhinged, unconstitutional illegal impeachment witch hunt.”

Trump said: “He’s a sellout, he’s a fake Republican and a disgrace to your state. He’s not the candidate that you want representing the Republican Party. Every single Republican needs to vote him out of office.”
>>>FOLLOW US ON TELEGRAM>>>

Gonzalez told The New York Times he had an “eye-opening” moment this year when he and his family arrived at the airport in Cleveland, only to be greeted by police officers. They were part of additional security measures being taken after his vote to impeach Trump.

“That’s one of those moments where you say, ‘Is this really what I want for my family when they travel, to have my wife and kids escorted through the airport?’” said Gonzalez.

The congressman, who will turn 37 on September 18, has a wife and two young children.

He was poised for a primary with Trump-endorsed Republican Max Miller.

See my full statement below regarding my decision not to seek re-election. pic.twitter.com/vsggxjD1FI