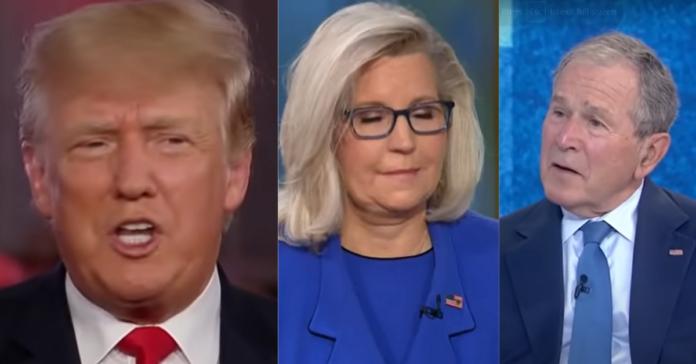 George W. Bush just entered Liz Cheney’s Wyoming election in what former President Donald Trump will surely see as an act of war. Bush will fundraise for Liz Cheney, Trump’s main target to unseat in the 2022 midterms, marking his first political event of the next cycle.

By openly going against Trump in this critical race, Trump will surely hit back hard and often making it that much easier to tie this Cheney to Bush’s Cheney and all his disastrous foreign policy decisions.

Look, the GOP voters, when finally given a choice (when Trump ran) to not vote for the establishment candidates, did just that. George W. Bush lost this war 5 years ago when Trump cleaned Jeb Bush’s clock. And the voters have continued that new pattern ever since.

This is a losing argument for Bush and Trump will be more than happy to fight it.

The race for Wyoming’s single U.S. House district has pitted two of the biggest names in Republican politics against one another: both of the party’s living former presidents.

Former President George W. Bush’s first campaign event of the 2022 midterms will be a fundraiser to support Rep. Liz Cheney, the Wyoming Republican who is among former President Donald Trump’s top targets to unseat.

The fundraiser will be held next month in Dallas, according to a copy of an invitation viewed by The Wall Street Journal.

Bush’s appearance at the event – he’s listed on the invitation as a “special guest” – is his first helping fellow Republicans running in the 2022 midterm elections. Word of the fundraiser was first reported by the Wall Street Journal.

But Bush’s move puts him at odds with former President Donald Trump , who has launched a full court press to defeat Cheney as she runs next year for a fourth two-year term representing the entire state of Wyoming in the House.

Stepping up his efforts, Trump backed one of the candidates hoping to defeat Cheney in next year’s election.

The former president endorsed lawyer and former gubernatorial candidate Harriet Hageman, writing in a release put out by his political action committee that “Harriet is all in for America First.”

And Trump slammed Cheney as “RINO,” which stands for “Republican in name only.”

And Trump charged that Cheney, who has followed in her father’s footsteps as a strong advocate for a muscular U.S. national security and military stance overseas, was a “warmonger and disloyal Republican.”

Cheney, a longtime vocal GOP critic of Trump, was the most senior House Republican to vote to impeach the then-president on a charge of inciting the deadly Jan. 6 insurrection at the U.S. Capitol by right-wing extremists and other Trump supporters, who aimed to disrupt congressional certification of Trump’s presidential election defeat to now-President Biden.

Former President George W. Bush’s first campaign event of the 2022 midterms will be a fundraiser to support @Liz_Cheney, via @MichaelCBender @kristinapet https://t.co/ymbsp6nLXw