Gen Mark Milley Comes Clean: “I am certain President Trump did not intend on attacking the Chinese” 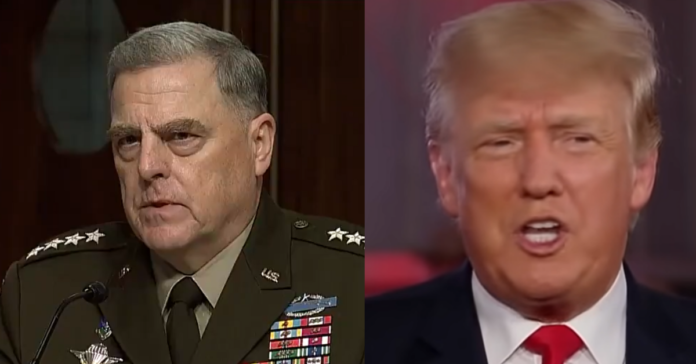 Joint Chiefs of Staff Chairman Gen. Mark Milley came clean Tuesday defending his behavior and confirming that Trump was in no way thinking about ‘wagging the dog’ with an attack on China.

“My job at that time was to de-escalate. My message again was consistent: calm, steady, and de-escalate. We are not going to attack you. “I sought to assure her that nuclear launch is governed by a very specific and deliberate process.

“She was concerned and made various personal references characterizing the president.

“I explained to her that the president is the sole nuclear launch authority and he doesn’t launch them alone and that I am not qualified to determine the mental health of the president of the United States.

“There are processes, protocols and procedures in place and I repeatedly assured her there is no chance of an illegal, unauthorized, or accidental launch.

“At no time was I attempting to change or influence the process, usurp authority, or insert myself in the chain of command, but I am expected, I am required, to give my advice and ensure that the president is fully informed on military matters,” Milley said.

Sen. Ben Sasse, R-Neb., said Tuesday that President Biden “lied” about his decision to withdraw from Afghanistan for political purposes after top defense officials said the president didn’t take their advice on keeping 2,500 troops in the country.

“President Biden lied when he told the American people that nobody urged him to keep 2,500 troops in Afghanistan,” Sasse said in a press release. “Today, under oath, General McKenzie flatly contradicted the President. This is the worst American foreign policy disaster in a generation and the President is trying to cover his a– with political spin.”

The senator was referring to comments made Tuesday by the head of U.S. Central Command, Gen. Kenneth McKenzie, who said during a hearing before the Senate Armed Services Committee that he recommended the U.S. maintain 2,500 troops in Afghanistan.”

Chairman of the Joint Chiefs of Staff Gen. Mark Milley said during the same hearing that he also made the recommendation, appearing to contradict Biden’s statements that he couldn’t “recall” any such advice.

.@SenTomCotton: “Why haven’t you resigned?”

Gen. Milley: “It would be an incredible act of political defiance for a commissioned officer to just resign because my advice is not taken.” He also says, “My dad didn’t get a choice to resign at Iwo Jima.” pic.twitter.com/7D4w3KUR03

“I explained to [Pelosi] … I am not qualified to determine the mental health of the President of the United States.”

Senator Tom Cotton Grills Gen. Milley Why He Has Not Resigned