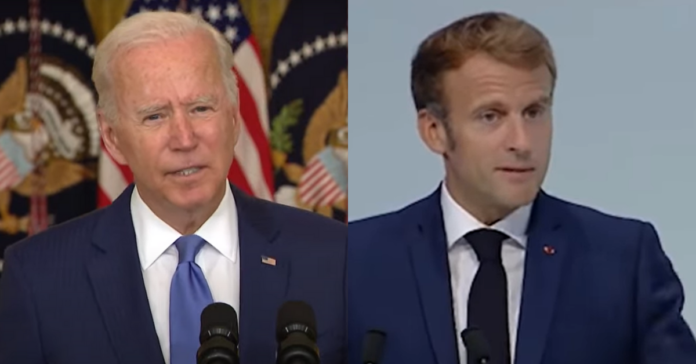 President Joe Biden continues to stumble and bumble and do his best to cause chaos with every move he makes. Now, it is not a particularly hard thing to piss off the French but it is nearly impossible to get a key ally like France to recall their ambassadors to America.

Over a submarine deal with another key ally, Australia. no less. This is an unprecedented humiliation for Joe Biden. How could the Biden administration not have handled this key weapons purchase better?

Le Drian said in a statement that President Emmanuel Macron told him to take this unprecedented move saying it “is justified by the exceptional seriousness of the announcements” made by Australia and the United States. He added the shocking cancellation of the contract by Australia to buy French conventional submarines only to turn around and buy nuclear-powered subs built with U.S. technology is “unacceptable behavior.”

The French government has hit out Australia’s decision to tear up a submarine deal with France worth more than €50 billion to instead acquire American-made nuclear-powered submarines.

“It’s a stab in the back. We had established a trusting relationship with Australia, and this trust was betrayed,” French Foreign Affairs Minister Jean-Yves Le Drian said in a Franceinfo interview Thursday morning. Le Drian added he was “angry and very bitter about this break up,” adding that he had spoken to his Australian counterpart days ago and received no serious indication of the move.

Under a deal announced Wednesday by U.S. President Joe Biden, Australia, the U.K. and the U.S. will form a new alliance to be known as AUKUS, which will see the three countries share advanced technologies with one another. As part of the new pact, Canberra will abandon its submarine deal with France.

Le Drian indicated that France would fight the move. “This is not over,” he said. “We’re going to need clarifications. We have contracts. The Australians need to tell us how they’re getting out of it. We’re going to need explanation.

We have an intergovernmental deal that we signed with great fanfare in 2019, with precise commitments, with clauses, how are they getting out of it? They’re going to have to tell us. So this is not the end of the story.”

And he added that the announcement of the move was reminiscent of Biden’s predecessor in office, Donald Trump. “What concerns me as well is the American behavior,” he said.

“This brutal, unilateral, unpredictable decision looks very much like what Mr. Trump used to do … Allies don’t do this to each other … It’s rather insufferable.”

In a statement released before the interview, Le Drian and Armed Forces Minister Florence Parly said: “This decision is contrary to the letter and spirit of the cooperation that prevailed between France and Australia.”

France recalls ambassadors from US and Australia in wake of new security pact it describes as “a stab in the back” https://t.co/bWCqFiTRyB

"They pull the guns and put it to my head"...U.S. Citizen Describes Harrowing Escape from Afghanistan and How Biden' State Department Did Nothing to Help [Video]