Ex-Clinton Adviser Says Hillary Could Be Indicted In Sussman Scandal: “The real point here is that this is the trail that leads to Hillary” 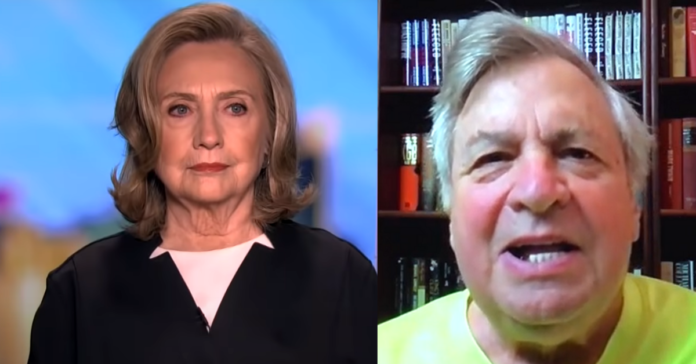 A former key adviser to Bill Clinton who fell in and out of favor with the Clinton machine just put Hillary Clinton on notice over the recent indictment of an ex-lawyer for her failed presidential campaign.

And what Dick Morris is saying about John Durham indicting former Hillary Clinton attorney Michael Sussmann for lying to the FBI about the Russia story may end up with Hillary facing justice in an American courtroom.

Because Morris said there is some chance that the Sussman indictment would lead to Hillary Clinton’s indictment. Morris said: “It might be that we’ve finally caught up with Hillary. We don’t know yet, but I’m going to probe it, and I think that there’s some chance now.

“Durham just indicted a guy named Sussmann for lying to the FBI. Sussmann worked for the law firm of Perkins Cole.

“That was the law firm that Hillary‘s campaign hired that conducted this stuff and fabricated the Steele dossier and all of that.

“And he lied to the FBI and did not reveal that Hillary and Hillary’s campaign was paying him. “That he was their employee.

“That he was acting on their behalf.”

“Hillary was basically his client, and he did not reveal that to the FBI, so he is under indictment for that.

“The real point here is that this is the trail that leads to Hillary.

“The point is that that led to two years of investigating and almost impeaching Trump, and it was totally phony,” Morris said. “Never happened.”

In the 26-page indictment of former cybersecurity attorney and Clinton campaign lawyer Michael Sussmann, one line reverberates: “You do realize that we will have to expose every trick we have in our bag.”https://t.co/SEUVu1cmqa

…Fifty years ago, with Nixon, his personal attorney and the Committee to Re-Elect the President (CREEP) paid for operatives to engage in disruptive and ultimately criminal conduct targeting his opponents…

…With Clinton, the indictment (and prior disclosures) suggest that Clinton campaign lawyers at the law firm of Perkins Coie helped organize an effort to spread Russian collusion stories and trigger an investigation.

WATCH: CNN's Manu Raju admits "It has been a tough week for President Biden"