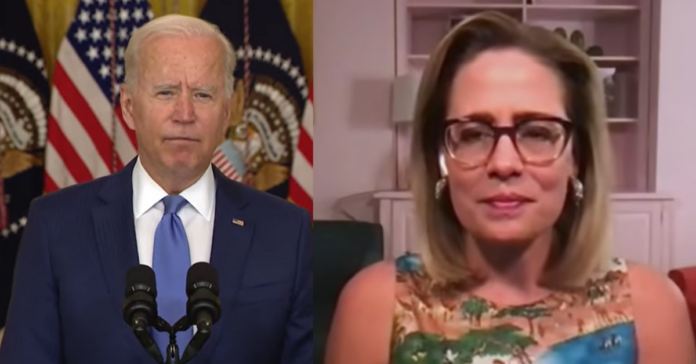 Senator Kyrsten Sinema just gave President Joe Biden an ultimatum in a show of her strength and Biden’s weakness according to a new report. Sinema met with Biden as Joe grows desperate to change the narrative that he is failing.

Biden has two big bills in the works and he needs them both to pass or he will look even weaker. Failure is contagious in politics and Biden had a horrible summer. But the moderate Dems are feuding with the liberals and neither side is willing to budge. Promises were made by Pelosi and Biden on the bills, promises they can’t deliver on, so as the deadlines draw near the two sides get farther apart.

Enter Kyrsten Sinema who gave Biden the ultimatum that if the House delays the vote on infrastructure bill she will refuse to support the other bill Biden needs to pass via reconciliation.

This effectively checkmates Biden and Pelosi because without her vote they can’t do anything in the Senate.

“Kyrsten does not share details of private conversations with President Biden or her colleagues.” They did add this though:

“She does look forward to House leadership making good on their commitment to an up-or-down vote on the historic and bipartisan Infrastructure Investment and Jobs Act next Monday — to create jobs and expand economic opportunities across the country.”

Sinema is not the only moderate taking this stand. Rep. KURT SCHRADER (D-Ore.) — one of approximately 10 moderate Democratic House members playing hardball with leadership — said he and several members of their group are on the same page.

Some of the lawmakers have conveyed that message up the chain to leadership and the White House. A senior Democratic aide confirmed the warnings.

“If they delay the vote — or it goes down — then I think you can kiss reconciliation goodbye,” Schrader told Playbook. “Reconciliation would be dead.”

This is obviously big news if moderates follow through. The threat comes days after Congressional Progressive Caucus Chair PRAMILA JAYAPAL (D-Wash.) declared that House progressives had the votes to tank the infrastructure plan, aka BIF, unless it’s paired with the larger $3.5 trillion reconciliation package.

…But the mods’ new threat indicates that a delay would not end well. “That’d be foolish on their part,” Schrader told us, noting that Clyburn, Pelosi and House Majority Leader STENY HOYER were in the room when the promise was made to them to take up the infrastructure plan on Sept. 27.

“That would indicate they’re not playing fair in the sandbox. … It would be a travesty if they try to play games.”

“SINEMA [said to] JOE BIDEN … If the House delays its scheduled Sept. 27 vote on the bipartisan infrastructure plan — or if the vote fails — she won’t be backing a reconciliation bill” — @playbookdchttps://t.co/FHyMfS6DAj