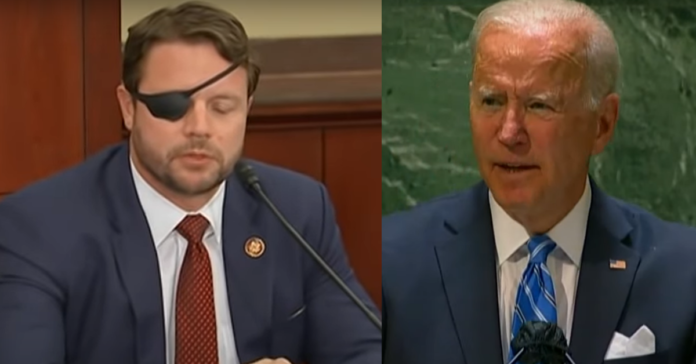 Rep. Dan Crenshaw (R-TX) accused the Biden administration’s “hypocrisy” at the U.S.-Mexico border before saying Biden’s bungled policy is a ‘dereliction of his constitutional duty.’

He went after Jen Psaki for saying the migrants “are not intending to stay here for a lengthy period of time” as a reason for Biden’s decision to give migrants different covid protocols than ordinary international travelers calling out the gaslighting hypocrisy of Psaki.

Dan said: “Look, the hypocrisy is really beyond the pale, and one thing that really stood out to me that Psaki said is that well, they don’t intend to stay here that long.

“Yeah, like everybody’s trekking hundreds of miles and paying off cartels to cross our border illegally, they’re not going to stay here very long. They are just day-trippers. They’ll be right out; maybe just do some shopping.

“I don’t think that’s what’s going on. You know, if you’re a European, you have to have a vaccine before you can even come into the United States.

“If you’re a U.S. citizen, you have to get a COVID test before you come back into the U.S.

“But if you’re an illegal immigrant, you don’t have to have any of that, and we’ll give you a hotel, we’ll give you free transportation, and if you’re lucky, the Democrats are also trying to give you a green card and a pathway to citizenship, so it’s a pretty good deal if you just skirt our laws and cut in front of the line of everybody else in the world who possibly has a valid asylum claim to our country.

“There’s hundreds of thousands of people being let loose into the interior with no way to track them, no way to get them back, and no way to enforce our laws.

“This is such a dereliction of constitutional duty that Biden has engaged in. It’s egregious.

“And it’s also dangerous because guess what else is coming across the border? Hundreds and hundreds of pounds of fentanyl.

“Human trafficking is occurring at record levels, as well. So, this is dangerous to our people, it’s dangerous because of the pandemic, it’s dangerous because of fentanyl overdoses, and it’s blatantly unfair and immoral when considering that there’s thousands of people around the world who want to come to this country, they want to do it the right way, and our system is so clogged up that they can’t do it,” he said.

Another HGTV Star, Double-Vaxed, Comes Down With COVID

CNN Sounds Alarm Over Red Wave In 2022: “This Poll Should Terrify Democrats”