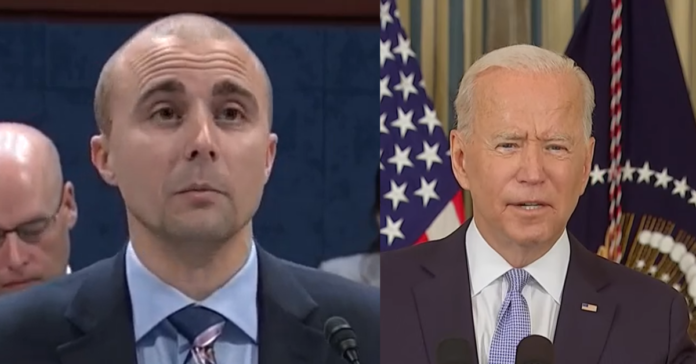 National Border Patrol Council Vice President Jon Anfinsen broke his silence on Fox News and put Joe Biden and the Democrats on notice for throwing the agents under the bus as DC politicians bicker rather than solve the crisis.

Anfinsen said: “The agents feel like, at all levels of management, from Customs and Border Protection to the Department of Homeland Security and to the White House, that they’ve been thrown under the bus because no investigation has been completed.

“Yet you’re hearing the president say these people will pay. The secretary echoed those sentiments. And then Friday, of course, CBP’s commissioner basically said the same thing.

“It’s insane that this is where the narrative has gone. In this situation, they were doing their job.

“There are allegations they were whipping people. We don’t carry whips.

“Those were reins, and no reins were used to whip anybody. Simple as that.

“Now there’s an incident where they can detract from the fact that they weren’t paying attention,” Anfinsen said about DC politicians who didn’t care about the border crisis until the optics forced their hand.

He continued: “They can point the blame at these agents on the ground and deflect any blame onto these agents who were doing their job.

“People are going to think ‘I stand a very good chance of staying. So of course they’ll cross because the message to them is ‘if you cross in this manner, you will get to stay.

“If Congress wants to make it easier for people to immigrate to the United States, fine change the laws.

“The way it is set up right now, we can’t keep doing this.”

“If we want to prevent situations like this from happening again, we have to change the law and the policy,” he added.

“This year’s ongoing immigration crisis has single-handedly done more to hurt the morale of the Border Patrol workforce than any other year in its history, and it didn’t have to happen like this,” National Border Patrol Council Vice President Jon Anfinsen told Fox News. https://t.co/1wONmwstpA

Jon Anfinsen, president of the BP union’s chapter in Del Rio, responds to the horse unit being suspended:

“Suspending them all for even a brief amount of time takes away one of the few remaining units that have been in the field making arrests and rescues on a regular basics.” https://t.co/I7WBnt565e pic.twitter.com/iBW5X7Gqds

One Chinese whistleblower dropped a bombshell about the coronavirus origins

VIDEO: Psaki SNAPS & Storms Out Of Room Over Biden Question, ‘Next Time…