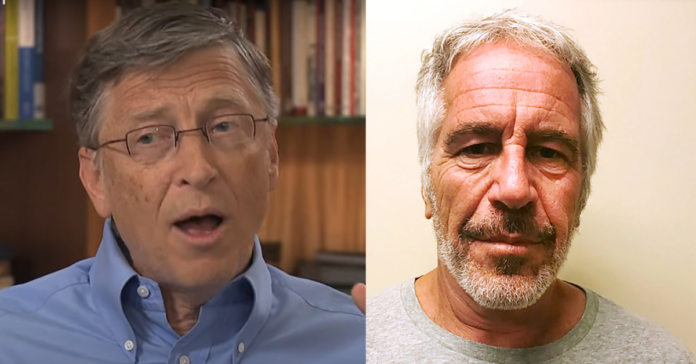 In an interview with Judy Woodruff on PBS, Bill Gates tried to explain his multiple meeting with disgraced pedophile Jeffrey Epstein and inexplicably made it worse for himself.

Gates has been tied to Epstein on multiple occasions and after his divorce, more information came out about his relationship with Epstein, and he has had a hard time explaining how he would be hanging out with Epstein after Jeffrey’s Florida convictions.

Bill arrogantly seemed unaware the questions were coming, and he flubbed them stammering and evading and created more questions about his relationship with Epstein rather than putting the scandal to rest.

Woodruff said: “You had a number of meetings with Jeffrey Epstein, who — when you met him 10 years ago — he was convicted of soliciting prostitution from minors. What did you know about him when you were meeting with him, as you’ve said yourself, in the hopes of raising money?”

Gates said: “You know, I had dinners with him.

“I regret doing that. He had relationships with people he said would give to global health, which is an interest I have.

“Not nearly enough philanthropy goes in that direction.

“Those meetings were a mistake.

“They didn’t result in what he purported, and I cut them off.

“You know, that goes back a long time ago now. So there’s nothing new on that.

Woodruff didn’t buy the spin and dug in:

“It was reported that you continued to meet with him over several years, and there were a number of meetings. What did you do when you found out about his background?”

Gates mumbled and stumbled and did his best to not answer the question.

“I said I regretted having those dinners, and there’s nothing, absolutely nothing new on that,” he said offered weakly.

“Is there a lesson for you, for anyone else looking at this?” Woodruff said.

Bill Gates then shockingly made it all worse and said:

“Well, he’s dead, so … You know, in general, you always have to be careful.

“And you know, I’m very proud of what we’ve done, very proud of the work of the foundation. That’s what I get up every day and focus on.”

Judy Woodruff: Do you draw any lessons from the mistakes you made with Jeffrey Epstein?

BREAKING: Biden admin setting Haitians FREE in the US despite claims of deporting them