Barack Obama On Biden’s Border Crisis: “The idea that we can just have open borders is unsustainable” 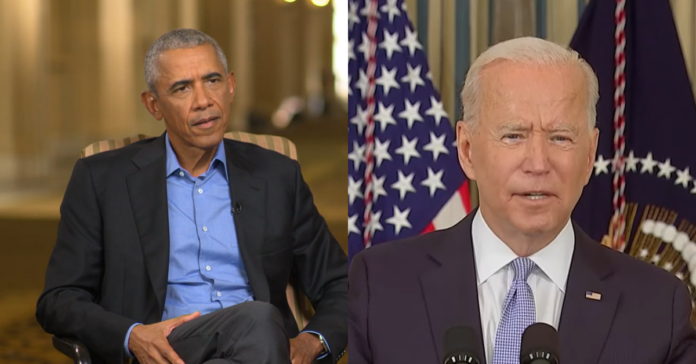 When the Dems bring out Barack Obama to sell something you know they are desperate. So with Biden’s agenda stalled in Congress, and a catastrophic failure fast approaching, Obama went on ABC to help the cause.

Obama said: “You’re talking about us stepping up and spending money on providing childcare tax credits — making those permanent to help families, who for a long time, have needed help.

“It’s paid for by asking the wealthiest of Americans, who have benefited incredibly over the last several decades — and even in the midst of a pandemic, saw their wealth and assets rise enormously — asking them to pay a few percentage points more in taxes in order to make sure that we have an economy that’s fair for everybody.

“I think anybody who pretends that it’s a hardship for billionaires to pay a little bit more in taxes so that a single mom gets childcare support or so that we can make sure that our communities aren’t inundated by wildfires and floods and that we’re doing something about climate change for the next generation — you know, that’s an argument that is unsustainable.

“You’re talking about rebuilding a lot of buildings, roads, bridges, ports so that they are fortified against climate change.

“And also, that we start investing in the kinds of energy efficiency that’s going to be required to battle climate change.

But when the subject of the border came up, Obama sunk Joe instead of helping him. Multiple reports show that many of the Haitians under the Texas bridge came from Chile and Brazil.

When Biden changed course from the Trump administration, desperate people saw their chance.

Going back to Trump’s policy, at least until Biden gets a handle on the border, is the obvious answer and Biden has been forced to by the courts in cases.

But Biden cannot fully embrace and re-implement Trump’s policies because of the far left. Maxine Waters called the images from the border worse than slavery so…

It may be too late for Joe anyway because once the door is open, or perceived to be open because our laws have mile-wide loopholes, it is a hard door to shut.

Obama said that the crisis at the border “is a painful reminder that we don’t have this right yet and we’ve got more work to do” before calling for comprehensive immigration reform to fix “a system that, overall, is dysfunctional.”

“It’s no secret that we don’t have that. It’s the reason I proposed comprehensive immigration reform. It’s the reason Joe Biden proposed it during his administration, and it’s something that is long overdue,” Obama said.

“As big-hearted as he is, nobody understands that better than Joe Biden.

“And the question is now: Are we gonna get serious about dealing with this problem in a systemic way, as opposed to these one-offs where we’re constantly reacting to emergencies? “And I think that that’s something that every American should wanna put an end to.

“Immigration is tough. It always has been because, on the one hand, I think we are naturally a people that wants to help others.

“And we see tragedy and hardship and families that are desperately trying to get here so that their kids are safe, and they’re in some cases fleeing violence or catastrophe.

“At the same time, we’re a nation state.

“The idea that we can just have open borders is something that as a practical matter, is unsustainable,” Obama said.

Obama said in an interview with ABC that the migrant crisis at the Del Rio, Texas border is a “painful reminder that we don’t have this right yet.” https://t.co/2boMIp6PDQ

"I'll give you my honest opinion"...Generals Milley and McKenzie Contradict Biden’s Claim No One Warned Against His Withdrawal Timeline