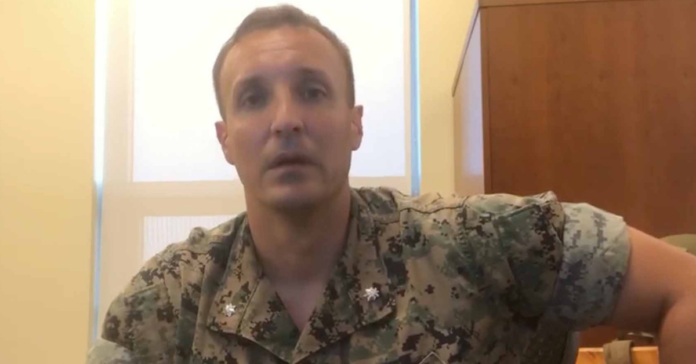 Marine Lt. Col. Stuart Scheller, the Marine who went viral for criticizing Joe Biden and his team’s debacle in Kabul, has been released from the brig. Scheller was initially jailed at Camp Lejeune last Monday.

“Lt. Col. Stuart Scheller Jr. is being released from confinement today, Oct. 5, 2021, as a result of a mutual agreement between Lt. Col. Scheller, his Defense counsel, and the Commanding General, Training Command,” said Capt. Sam Stephenson, Training and Education Command spokesperson. “No additional details regarding the agreement may be released at this time.”

“He’s in a cell with no books, no phone no nothing,” Cathy Scheller said. “We’re heartbroken over this and so is he. We love America and we are so shocked at what we’re learning about what the new military is like in this country.”

“All our son did is ask the questions that everybody was asking themselves, but they were too scared to speak out loud,” said Stu Scheller Sr last week. “He was asking for accountability. In fact, I think he even asked for an apology that we made mistakes, but they couldn’t do that, which is mind-blowing.”

“They had a gag order on him and asked him not to speak,” the senior Scheller said. “He did, and they incarcerated him. They don’t know what to do with him.”

The Marine Corps issued a statement that said:

“The time, date, and location of the proceedings have not been determined.  Lt. Col. Scheller will be afforded all due process.”

First you pulled the chain of retirement. I broke that chain. Then you pulled the chain of family stability. That chain also broke. All you have left is the threat of Court Martial. “It’s a felony Stu. No one wants that. It will ruin your whole life.” But you never understood me. I’m comfortable going back to Cincinnati and working at Applebees again. Do you want freedom fries with that?

“Effective immediately upon your receipt below, you are hereby ordered to refrain from posting any and all material, in any form without exception, to any social media. In this context, the term ‘social media’ shall be construed very broadly to include any medium by which you may share information with groups of people. It includes more traditional forms of social media (e.g., Facebook, Youtube, LinkedIn) as well nontraditional methods one might use to circumvent established social media (e.g., mass emails, group text messages, electronic bulleting boards). You are also prohibited from communicating through third parties or proxies.” What happens when you communicate an order that stipulates you to stop communicating? Remember… I have only spoken truth.

Another truth… WE don’t want our children abused in the same failed systems. The systems remain, despite their repeated failures, because key holding hypocrites have safe haven within the system. “Why not just get out and say that Stu? Why not stay quiet and work within the system?” WE say this to you… if you are making a difference on your current path… why is the Republic in decline? The Apathetic American convinces himself to apply pressure in other ways only because he can’t see the invisible chains. The keyholders refuse to take accountability when it is so obvious. They are unable or unwilling to do what is right. But WE are not like the Apathetic American. WE have faith. WE believe what you stand for can only be defined by what you’re willing to risk.

President Trump. I was told by everyone to kiss the ring because of your following and power. I refuse. While I respect your foreign policy positions, I hate how you divided the country. I don’t need or want your help. You do not have the ability to pull US together. You may even win the next election. But your generation’s time is running out. Tell your son to stop tweeting about me. Your whole family knows nothing about US or our sacrifices. I could never work with you. I’d rather sit in jail and be released with a dishonorable than make compromises in my beliefs.

General Mattis. The warrior monk. We all know you became a monk because you are gay. To be clear, my generation don’t care about sexuality. We are better than that. But our generation does care about honesty. You brought to my Infantry Officer Course 1-06 what can only be described as a female prop. It was uncomfortable for all of us. As soon as you left, we all knew you were a liar. We were young, but not stupid. Back then Don’t Ask Don’t Tell was still a policy. We understood why you lied. But as the policy was rescinded, and we continued to hear the rumors, it bothered us that you kept up the lie. You weren’t a monk. You were dishonest. And for all your talk about the 5-3-5 and counter-insurgency… can we go back and review the record? The academics loved you. You talked about reading books all the time. The only problem… you didn’t win any wars. Maybe you should have read different books.

General Petraeus. The counter-insurgency genius. We all know you went to Yale. We all know that you walked around the wars without PPE. But what if you used that education to offer insight on the ineffective nature of counter insurgency? You led Iraq and Afghanistan because you were such an influential leader. However, history demonstrated you didn’t have the insight of George Bush Sr. who knew when to pull out of a military campaign once the objectives were achieved. History somehow forgot George Bush Sr.’s genius. If you were half as smart as him, you would have recommended an efficient withdraw much sooner than the long wars you promoted. But that would have marginalized the theory of your genius. And without your celebrity… there are no adulterous escapades.

General Flynn. You gave interviews about me. Pretending to understand me. You are the same as the rest. You were caught in a lie. My generation is sick of your lies. We are not the same. Stop speaking my name as if you understand me. You could never understand US.

PHDs teaching at military academies. Bill Lind just wrote an article about my moral courage titled The View from Olympus: The Scheller Affair and Moral Courage. Let me be clear Mr. Lind, despite your contributions to the Marine Corps, you could never understand me. And my contempt for the academics who have attached themselves to the military machine runs deep. I will never relate to a person who refused to fight in the arena, yet feels entitled enough to offer opinions as if the lions should listen. Critics. Mr. Lind… General Berger’s opinion matters more than yours, despite your condescending opinion towards him. Please let all the PHDs in the military education system know the same. And tell General Gray to get off the MCU stage. He had his turn. Maneuver Warfare is outdated. It’s not attrition vs. maneuver. It’s decentralization vs. synchronization. And the critical question of where that balance occurs is the question you failed to address in the current version of MCDP 1. Marines all think decentralization should occur at the lowest levels despite a deeper understanding of how to maximize combat power. But I’m sure your generation of deep thinkers knew that…

To General Alford adjudicating my legal situation. When I briefed you in July you said, “We have an entire generation of LtCols who don’t know how to make decisions. They feel the need to ask permission.” Ask Tom and Sung, they were there. My generation is sick of being bullied. Maybe my generation knows a little bit more than you think. We’ve watched you play politics for 20 years. You thought we were too stupid to learn?

Task and Purpose, despite your factually incorrect article about my legal right to prefer charges on General McKenzie (which still has been denied by the same people trying to hold me accountable… even after the news of the drone strike), you don’t understand me. I do plan to bring the whole system down. Yes, Task and Purpose, I am brave enough to say it again. What say you now?

What happens when all you do is speak truth and no one wants to hear it. But they can probably stop listening because… I’m crazy… right?

Col Emmel please have the MPs waiting for me at 0800 on Monday. I’m ready for jail.